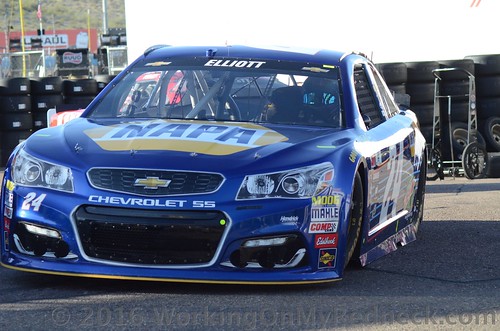 As the summer closes in on fall and the last race of segment number comes into view, The Chase is in sight, not only for the drivers but also for our players! After calculating the numbers this past weekend, It is a foregone conclusion that Edie the Las Vegas Super Star will take home the top money!  Not even an earthquake could shake her off of the top spot with her 45 point lead, that is more points than can be scored in one race!  Nevertheless, the rest of the top four paying spots are still in contention.  So despair not my redneck race fans!

This week we have wide spread choices for the Pure Michigan 400, as you will see in the following paragraphs!

There are three drivers this week that have a trio of rooters.  Starting off alphabetically we have William Clyde Elliott, Jr., aka Chase Elliott.  The backers of Chase Elliott this week comprise a list of A&M Aggie Sue, Doug The Gandy Candy Dude, as well as Water Cooler Leon.

Not to be out done this week are Bobby Blue Crush, Jim, aka Chiefy and Jason The Latent Tie Dye Hippie and All-Around Edgy Dude who are whole heartedly backing “Blazingly Bad” Brad Keselowski at Michigan.

Rounding out the top three groups are Carole, aka Rudy, Linda the Cookie Mom and Jerry The Buschwacker who are betting the farm that Joey Logano can drive his hot rod into Victory Lane Sunday evening.

Even though Denny Hamlin has recently visited Victory Lane he could only gather up two players, Jeremy The Coach and Karen The Highly Opinionated Southern Belle to root for him this weekend.

Lastly our presumed segment two winner Edie The Las Vegas Super Star is all in for “Young Money”, Kyle Larson this week and has influenced Cole the On Demand Baseball Player to join her this weekend!

For all the math majors out there that totals 13 player who have teamed with others this week. That leaves a very large number, 9 in total, that are independent thinkers, and are most definitely in bidnez for themselves!

Just a final thought in the final race of this segment.  Is it just me or has anyone else gotten sick and tired of all the rain that has plagued the races over the past month?