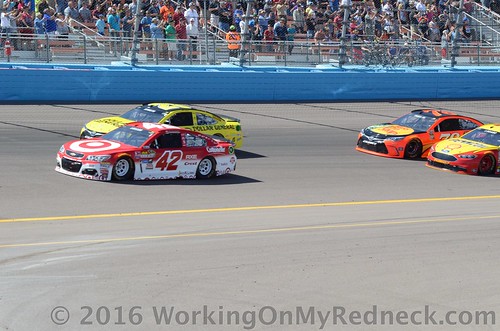 “Young Money”, aka Kyle Larson, picked a good time to get his first win in the NASCAR Sprint Cup Series, driving away from Chase Elliott and “Blazingly Bad” Brad Keselowski on a late restart to take the Pure Michigan 400 on Sunday at Michigan International Speedway.

Larson, the driver of the Chip Ganassi Racing with Felix Sabates No. 42 Chevrolet, became the 13th different driver to win a race this season and firmly planted himself among those vying for the 16-car field in the Chase for the NASCAR Sprint Cup.

“Young Money” took the lead away from Chase Elliott on a restart with 10 laps to go when Elliott’s No. 24 Hendrick Motorsports Chevrolet appeared to get loose. From there, Larson drove away for the victory that had eluded him in his first 98 Sprint Cup Series races.

In the final race of the second segment, Edie The Las Vegas Super Star took her 45 point lead over the field prior to the start of the race and compounded her lead by picking the race winner, Kyle Larson!  That catapulted her to an even larger margin of victory, 50 points!  Also joining in the fraternity this week is our youngest player, Cole The On Demand Baseball Player, each grabbing 45 points!win

Both A&M Aggie Sue and Leon Your Most Humble Sheriff, aka known as The Bossman and Water Cooler Leon collected 40 points for riding on the edge of their seat most all day in the copilot seat in Chase Elliott’s race car.

The unlikely trio of Bobby Blue Crush, Jim, aka Chiefy and Jason The Latent Tie Dye Hippie and All-Around Edgy Dude pulled out a nice 39 points to add to their second segment final tally.

Lonna The Quilt Angel received 37 points from Kevin Harvick’s 5th place finish and that was enough to keep her moving away from “The Outhouse”.

To end the segment there was wide spread movement throughout the leaderboard this week.  However there were not huge exchanges in positions, generally just a slight adjustment of positions.  Those players who remained in their satus quo positions at the end of the this segment were, Edie The Las Vegas Super Star, Leon Your Most Humble Sheriff, Bobby Blue Crush, Jeremy The Coach, Snoopy Dawn, Linda The Cookie Mom, and Jerry The Buschwacker.

The single largest mover this last week of the second segment was Kathy The Church Forecloser.  The ol Church Forecloser slipped and fell three places this week.  She wound up just three points out of “The Outhouse”, she just could not evict Jerry The Buschwacker!

There was a quintet of players that just did the “Texas Two Step” this week.  Cole the On Demand Baseball Player, Jim, aka Chiefy, as well as Doug The Gandy Candy Dude all ascended up the leaderboard two spots this week.  Meanwhile, David The Mudslinging Throttle Jockey and Zee, aka Sissy stumbled and fell two spots to end the segment.

Those players not mentioned, heretofore, either climbed up one position or slide down one position this week.

You know that most all of the players had a very good race when the lowest scorer of the week adds 20 points to their weekly total.  In closing out this segment David The Mudslinging Throttle Jockey secured “The Crappiest Pick of The Week”!

And to wrap up all the 2nd segment business, Jerry The Buschwacker will be receiving the 2nd segment “Outhouse Award”!  He has become the first two-time recipient of that prestigious award!

So next week we all get a fresh start!  We can all dream on about making one more attempt at securing some of that big Redneck Fantasy League money, as well as some Chase and Championship mulla!!