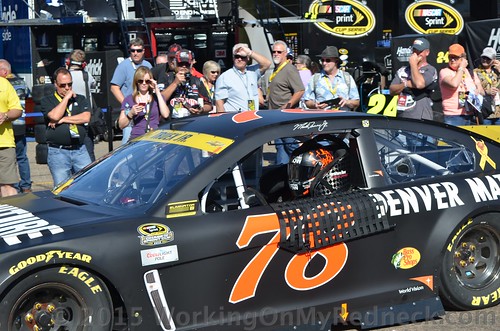 And that was the difference in Truex’s unexpected victory in Sunday night’s Bojangles’ Southern 500 at Darlington Raceway.

It was Truex who celebrated in Victory Lane, after beating Harvick to the finish line by .606 seconds, leaving the driver of the No. 4 Stewart-Haas Racing Chevrolet to bemoan his 17th second-place finish in the past 61 races—many of which he could have won with flawless execution on pit road.

It is Jeremy The Coach who starts off this final segment of the 2016 Fantasy League picking the Darlington winner. Martin Truex, Jr.  That choice gave The Coach a huge boost and 44 points to start off the segment

A pair of racers, David The Mudslinging Throttle Jockey and Doug the Gandy Candy Dude, as well as Snoopy Dawn start off this segment in second place when their choice, Kevin Harvick finished in second place once again, all the while logging a nifty 41 points.

Likewise Jerry The Buschwacker and Cole The On Demand Baseball Player came out smelling like a rose, scoring 36 points, when Joey Logano  was able to finish.

Lastly, A&M Aggie Sue rounds out our top five scorers of the week with 33 points to start her segment off.

There were five players who showed their prowess in picking winners by scoring just a single digit at Darlington.  Those five players include Karen The Highly Opinionated Southern Belle, Jim, aka Chiefy, Zee, aka Sissy, Jason The Latent Tie Dye Hippie and All-Around Edgy Dude, Edie The Las Vegas Super Star and Lonna the Quilt Angel.

“The Crappiest Pick of The Week” award goes to a very deserving player, Kathy The Church Forecloser.  The Forecloser was able to salvage 5 microscopic points Sunday.  Not only did The Forecloser win the race for the crappiest pick of the week, she also has started out this segment as the first week’s “Outhouse Award” winner!

For all of the players who have yet to win any money this season, we all have just one last chance for working on that dream!

Next week NASCAR rolls north up I-95 to Richmond, VA.

TIL NEXT WEEK, PULL UP YOUR GLOVES, FLIP DOWN YOUR VISOR, AND LET’S GO RACIN’!