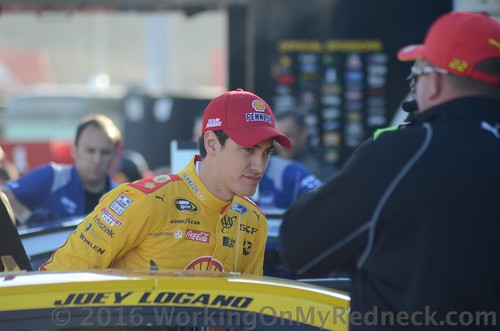 Well it’s a long way to Richmond rollin’ north on 95!

That is exactly what the NASCAR haulers will be doing this week.  It is the last race in “the regular season” before The Chase cranks up at Chicagoland in about a week and a half.

Nearly one quarter of The Redneck Fantasy League, five players in total, have jumped on the Joey Logano bandwagon for the Richmond race Saturday night. Those five players include Snoopy Dawn, Linda The Cookie Mom, Zee, aka Sissy, Skid-Marc, as well as Leon Your Most Humble Sheriff.  Each of these players are hoping to put max points into their totals column this week.

Secondly, one fifth of the fantasy league, four players, are betting the farm that Denny Hamlin can deliver a win for them this week.  Those four players consist of Jim, aka Chiefy, Doug the Gandy Candy Dude, Bernie The Stalker, as well as Jeremy The Coach.  Each of these players could really use a great race to propel them into the upper echelon of the totem pole.

Next there are three players, Karen The Highly Opinionated Southern Belle, A&M Aggie Sue, as well as Dan The Numbers Cruncher, who are all agreeing that Kyle Busch can bring them a great score with a victory at Richmond.

There are four drivers that share a rooting section of two players each this week.  The first of those drivers are “Cousin Carl” Edwards with support from Carlton The Doorman and Jason the Latent Tie Dye Hippie and All-Around Edgy Dude.  Both of these players are extremely hungry for a win this week!

Both Kathy The Church Forecloser and Carole, aka Rudy seem to think that this is Matt Kenseth’s week to drive into Victory Lane and hoist the hardware.

Meanwhile, Edie The Las Vegas Super Star and Cole The On Demand Baseball Player are thinking that “Young Money”, Kyle Larson, is ready to drive his hot rod again into Victory Lane.

Lastly, Jerry The Buschwacker and Lonna The Quilt Angel are backing Mr. Six-Pack, Jimmie Johnson, and are so desperately hoping that ol JJ can erupt form his summer long slump and return to the winner’s circle.

Well it’s a long way to Richmond rollin’ north on 95!