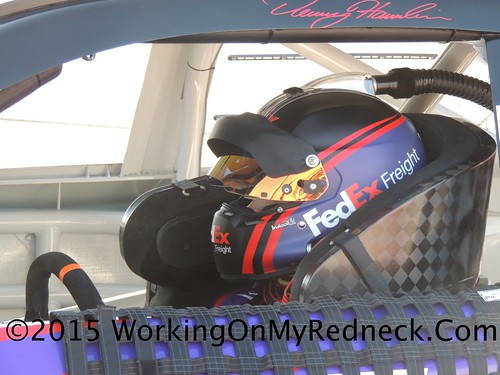 Denny Hamlin won a wild race at his home track, and the top four Chase hopefuls entering Saturday night’s Federated Auto Parts 400 all held serve at Richmond International Raceway in an event that ended in overtime after a record 16 cautions.

Jamie McMurray locked up a spot in the Chase for the NASCAR Sprint Cup with a seventh-place finish, and Austin Dillon did likewise with a 13th-place run.

Sunoco rookies Chase Elliott and Chris Buescher both weathered some tense moments to qualify for NASCAR’s 10-race playoff, the first time two rookies have ever been included in the Chase field—and the first time any rookie has made the Chase since Hamlin accomplished the feat in 2006.

This week there were four players who were riding shotgun with “The Delivernator,” Denny Hamlin at Richmond, Jim, aka Chiefy, Doug The Former Mudslinger and Psychic, Turned Gandy Candy Dude, Bernie the Bay Area Bandit, as well as our current leader Jeremy The Coach!  All four players racked up a grand tally of 44 points this week!

Both Edie The Las Vegas Super Star and Cole The On Demand Baseball Player really padded their totals this week with 40 points from Kyle Larson’s second place finish.

There is a trio of players that also performed excellently on this second race of the segment.  Those three players include Karen The Highly Opinionated Southen Belle, A&M Aggie Sue, as well as Dan The Numbers Cruncher.  These players secured 32 points from Kyle Busch’s 9th place showing at Richmond.

Rounding out the top five scores this week are Jerry The Buschwacker and Lonna The Quilt Angel.  Both players were rewarded with 30 points from Jimmie Johnson’s 11th place finish.

This week, with the exception of the top two players on the leaderboard and our “Princess of the Poophouse”, the standings look like something that emerged from a blender!

Second on the Richter Scale of movement is Jim, aka Chiefy who climbed up the totem pole seven (7) places to reside this week in 13th spot.

Still another trio, Edie The Las Vegas Super Star, Carole, aka Rudy, as well as Jason The Latent Tie Dye Hippie and All-Around Edgy Dude banded together and moved five (5) places this week.  The Las Vegas Super Star faired much better of the trio this week stepping up five positions to rest now in 15th place. Conversely, Rudy, and The Edgy Dude slide down five spots to land in 20th and 21st, respectively.

Lastly, rounding out the top five movers is Bobby Blue Crush who slipped down four (4) places, fell out of the top five, to reside now in 9th place.

Once again, this week we have so-winners of “The Crappiest Pick of The Week” award.  There were a total of five (5) players, nearly one quarter of The Redneck Fantasy League, received a single digit for their score this week!  Slo there were plenty of choices for the this award.  However, both Kathy The Church Forecloser and Carole, aka Rudy were able to score on four (4) points this week!  And for their lack of proficiency in selecting a viable winner they share this award The Crappiest Pick of The week award this week.

Keeping in mind Kathy The Forecloser’s four (4) points for the week, those same four points kept her in sole charge of “The Outhouse” for the second week in a row!

Now that NASCAR has had “the last dance” of the regular season, next week The Chase begins with the race at Chicagoland, which is really located in the city of Joliet, IL!