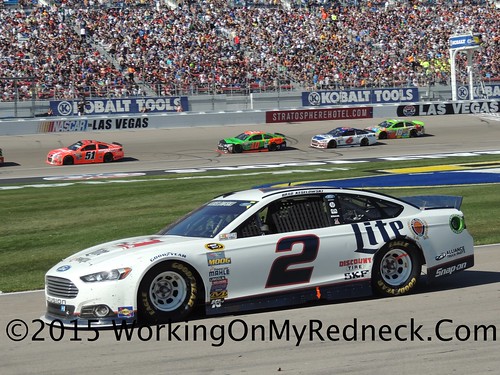 This week is race number two in The Chase For The Championship and it all takes place in The Granite State of New Hampshire, on “The Miracle Mile” at Louden.

As the title for this post indicates, this week both “Blazingly Bad” Brad Keselowski and Martin Truex, Jr. share the spotlight with a rooting section of five of our players, one quarter of The Redneck Fantasy League, putting their faith with them.  The five players laying it on the line for “Blazingly Bad” Brad are Snoopy Dawn, her roommate, traveling partner, and legal representative, Carlton The Doorman, Doug The Gand Candy Dude, Zee, aka Sissy, as well as Edie The Las Vegas Super Star.  This partnership is, in and of itself, some type of headline news that The Redneck Fantasy League P.I. has been dispatched to investigate this week!

Likewise, Martin Truex, Jr. has another quarter of The Redneck Fantasy League betting the farm that he can make it two race wins in a row!  Those five players consist of Jerry The Buschwacker, Linda The Cookie Mom, Lonna The Quilt Angel, Bobby Blue Crush, as well as Jason The Latent Tie Dye Hippie and All-Around Edgy Dude.

Almost not to be outdone is the support this week for Matt Kenseth.  He has the backing of four players this week, Karen The Highly Opinionated Southern Belle, Leon Your Most Humble Sheriff, Bernie The Bay Area Bandit and Part-Time Stalker, as well as ol Skid-Marc.

Lastly we have Kathy The Church Forecloser, Jim, aka Chiefy and Jeremy The Coach putting their collective support with Smoke this week.  All three are somehow hoping that there is one more rabbit to pulled out of Tony Stewart’s hat before he departs NASCAR.

That leaves five players who, in this politically charged environment, would be considered independent voters, but we all know that they are really just in bidnez for themselves!

I am sure that some or all of the above mentioned players are surely hoping that this week their pick will surely be a friend!

TIL NEXT TIME, PULL YOUR GOLVES UP, FLIP YOUR VISOR DOWN, AND LET’S GO RACIN’!