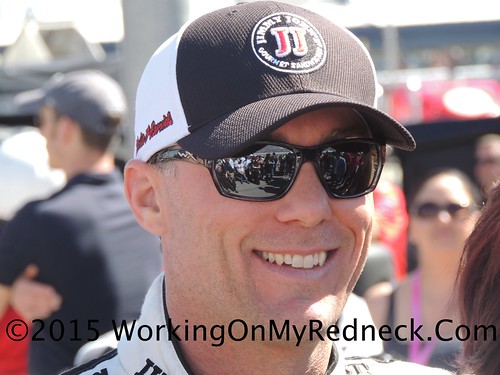 Kevin Harvick used an aggressive restart with six laps remaining Sunday to cap a late-race surge that helped him claim victory at the Bad Boy Off Road 300 at New Hampshire Motor Speedway.

Harvick had not won at New Hampshire since 2006, which previously was his only win at the track. The 2014 Sprint Cup champion now joins Martin Truex Jr. as drivers advancing in the Chase for the NASCAR Sprint Cup after the first two races of the playoff system.

Well this award goes unrewarded this week.  It looked like there were going to be four players sharing this award this week but ol “Freaky Fast” Kevin Harvick slipped by Matt Kenseth on the last restart at Louden and ruined their day!

Speaking of Matt Kenseth and losing the lead on the last restart to Kevin Harvick, ol Skid-Marc, Bernie The Bay Area Bandit and Part-Time Stalker, Karen The Extremely Opinionated Southern Belle, as well as Water Cooler Leon are really hanging their heads after what could have happened at Louden!  Even though they were the highest scorers of the week, 40 really important points, they could have each tutted their horns for selecting the winner at Louden.  Oh well, “you can’t always get what you want babe”, but they got what they needed!

Also have a really great Louden race was Carole, aka Rudy, who gathered up 39 points for Kyle Busch’s 3rd place finish.

Additionally, there was a very strange quintet heard singing “happy days are here again” with the waving of the checkered flag at Louden.  That eclectic group of players that were backing “Blazingly Bad’ Brad Keselowski were comprised of Snoopy Dawn, Carlton The Doorman, Edie The Las Vegas Super Star, Doug The Gandy Candy Dude, as well as Zee, aka Sissy all added 38 points to the totals.

Still another equally strange quartet emerged this weekend, Jerry The Buschwacker, Linda The Cookie Mom, Lonna The Quilt Angel and Bobby Blue Crush, all scoring 36 points from Martin Truex, Jr’s 7th place finish.  It had looked like Truex would go back to back in victory, dominating the 3/4 of the race, however, it was not to be this week.

Rounding out the top five scorers of the weeks was Cole the On Demand Baseball Player.  The Colester was the sole player that selected Jimmie Johnson this week, and was rewarded 33 points for his foresight!

There was wide scale movement this week, however there was not a large scale movement.  There was one third of our players, seven (7) in total who held serve in their previous positions.

Having said all that, the single largest mover this week was Dan the Numbers Cruncher.  You see The Numbers Dude stumbled, slipped, and fell five (5) places when the checkered flag fell at Louden, landing in 15th spot!

There were four players that moved three (3) places on the leaderboard this week.  Jeremy The Coach, A&M Aggie Sue, David The Mudslinging Throttle Jockey, as well as Jim, aka Chiefy all slithered down the totem pole three (3) spots, landing in 3rd, a tie for 11th, 16th and 18th spots, respectively.

Last on The Redneck Fantasy League Richter Scale of movement is a group of players Doug the Gandy Candy Dude, Snoopy Dawn, Jerry The Buschwacker, Dan the Numbers Dude, Zee, aka Sissy, and Lonna The Quilt Angel.  All of these players moved up just one position this week!

The Crappiest Pick of The Week will be shared by a trio of players.  All three players were really hoping that Tony Stewart knew his way to Victory Lane at Louden.  Unfortunately for Smoke it has been too long since he had been in Louden Victory Lane!  So this week Jeremy The Coach, Jim, aka Chiefy as well as our long-standing cellar dweller and  “Guardian of The Gashouse”, Kathy The Church Forecloser will share this award!

Speaking of Kathy The Church Forecloser, she is once again in sole possession of “The Outhouse Award”!  It is as if she has found her niche in this NASCAR fantasy league thing!

With one third of this segment now in the books, there is now doubt that I can hear, louder and louder, some of the players singing one of my favorite Rolling Stone songs this week!!