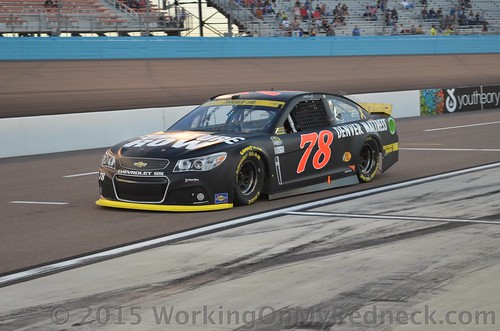 It was a Martin Truex Jr. blowout, a Jamie McMurray blow-up and a Jimmie Johnson “We blew it again.”

Truex cruised to a decisive victory in Sunday’s Citizen Soldier 400 at Dover International Speedway, a race that pared the Chase for the NASCAR Sprint Cup field from 16 drivers to 12.

Winning for a fourth time this season, a second time at Dover and the seventh time in his career, Truex was without peer after a pit road snafu on Lap 279 of 400 knocked Johnson off the lead lap and out of contention for the win.

This week there were three players who were riding shotgun with Martin Truex, Jr.  That trio includes Zee, aka Sissy, Jim, aka Chiefy and Leon Your Most Humble Sheriff, all scoring the max amount of points, 45 big ones!

Even though she sits squarely on the throne once again this week in “The Outhouse”, Kathy The Church Forecloser, finally broke out of her early segment slump to grab 40 crucial points and be the second highest scorer on Sunday afternoon!

Doing very well this week was a quintet consisting of Bernie the Bay Area Bandit, David The Mudslinging Throttle Jockey, Skid-Marc, Cole The On Demand Baseball Player, as well as Jason The Latent Tie Dye Hippie and All-Around Edgy Dude.  This unlikely collection of kindred spirits all logged 38 points when the checkered flag flew.  They all had selected “Blazinly Bad” Brad Keselowski, with the exception of the Edgy Dude, who was rooting for Chase Elliott.

Rounding out the top five scores of the week is another group of five players, Carole, aka Rudy, Edie The Las Vegas Super Star, A&M Aggie Sue, Doug The Gandy Candy Dude, as well as Bobby Blue Crush.  All  five players pulled down 35 points for their efforts.  The Las Vegas Super Star, The Gandy Candy Dude and Blue Crush all selected Joey Logano.  However, Rudy and A&M Aggie Sue were rooting for Jimmie Johnson.

Once again there was widespread movement from within the ranks!  Sixteen out of twenty two players exchanged places on the leaderboard after Dover.

The single largest mover this week was Karen The Extremely Opinionated Southern Belle who plummeted six (6) spots, falling to 19th place this week when Kevin Harvick suffered a mechanical failure in the rear end housing early in the race.

The trio of Jeremy The Coach, Zee, aka Sissy and Leon The Retired Airline Captain, Part-Time Cardiologists and Strawberry Picker all moved four spots, Sissy and The Strawberry Picker stepped up four (4) spots resting in 13th and 3rd, respectively.  However The Coach was not so lucky this week.  No The Coach fell from the money position of third to now land in 7th place.

Lonna The Quilt Angel, is making a charge to the basement this week.  She fell three (3) more places to land in 21st place and challenging The Church Forecloser for the absolute control of “The Outhouse”!  The Quilt Angel is just a scant 10 points from evicting our resident cellar dweller, The Church Forecloser.  Stay tuned race fans the intensity level is cranking up!

Finally there is a trio rounding out the top movers of the week,  That trio consists of David The Mudslinging Throttle Jockey, Jim, aka Chiefy and Carole, aka Rudy.  All three of these players climbed up two places this week.

As previously noted, Lonna The Quilt Angel is making a full speed run for The Outhouse this week!  With her microscopic 3 points from Dover she is wins this week’s “Crappiest Pick of The Week”!

Stop me if you have this before!

Next week is a home game for all the NASCAR teams racing at Charlotte.  Who says that you can’t go home?