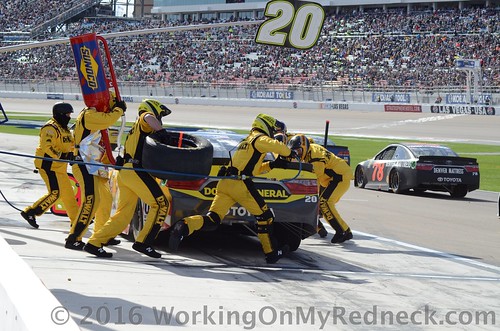 As the final 2016 segment gets to the halfway point, and the competition cranks up another level, the tension and stress also ratchets up correspondingly, it becomes extremely obvious that “if you can’t run with the big dogs, you need to sit up on the porch”!  The “Round of Eight” begins this Saturday night at everyone’s home track, Charlotte Motor Speedway.  For all 40 race teams there will be no hopping on airplanes, no eating out a restaurants, being cooped up in their motorhomes for the weekend, no all nighter ‘red eye’ flights back to Charlotte after the races.  No, this week allows everyone to sleep in their own beds, drive back and forth to the race track from their own cribs, all in all, this week is an abnormally normal weekend for the race teams!

As the accompanying photo would suggest, Matt Kenseth is the overwhelming favorite amongst The Redneck Fantasy League this week!  Nearly one quarter of the players, four in total, have latched onto the wagon of Kenseth this week.  Included in the the list of four players this week are Carlton The Doorman, Edie The Las Vegas Super Star, A&M Aggie Sue, as well as Kilimanjaro Bobby.

Meanwhile Snoopy Dawn, Jerry The Buschwacker and David The Mudslinging Throttle Jockey have jumped into “the little read wagon” of Carl Edwards at Charlotte.

This week we have a trio that could be put into the category of “a day late and a dollar short”!  You see Skid-Marc, Kathy The Church Forecloser, as well as Karen The Highly Opinionated Southern Belle are all pooling their efforts and backing Martin Truex, Jr., hoping that he could go back-to-back and drive his FRR Toyota into Victory Lane for the second week in a row!

Both Jim, aka Chiefy and Doug The Gandy Candy Dude are putting their marbles into the sack of the defending Sprint Cup champ, “Rowdy” Kyle Busch.

Lastly Bernie The Bay Area Bandit and Zee, aka Sissy are putting their fate into the hands of Jimmie Johnson, hoping that ol Mr. Six-Pack can resurrect the magic and the dominance that he once displayed in Charlotte in years gone by!

For all the readers reading this post the above numbers adds up to fourteen (14) players that have joined forces and are onboard with the aforementioned drivers. Doing basic math in public, something that I really try to avoid like the plague, that leaves eight (8) players that are independent thinkers this week!

As I mentioned in the lead in paragraph, we are approaching the halfway point of this, the final segment of 2016, some players are riding high and soaring while there are a few players languishing in the standings.  For those that are sailing high above the ridge lines the future is bright and their bank accounts could be fattened at the end of the season.  Meanwhile, for those few players who are hopelessly floundering at the bottom of the leaderboard and hanging around “The Outhouse”, it is for those players who are down and out that I offer a “parachute”!

Good luck to all Saturday night!