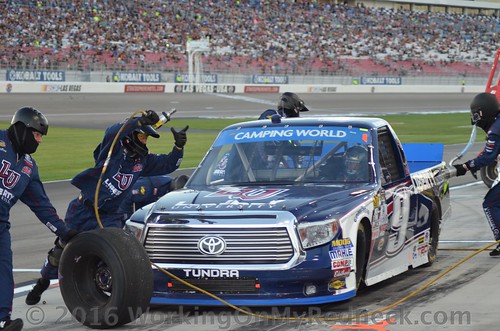 Some of you maybe asking, “Leon, Our Most Humble Sheriff, what the heck does this photo that you have taken at the Las Vegas Truck race of William Byron’s pit stop have anything to do with our Redneck Fantasy League Championship standings”?  We are more concerned with the Sprint Cup series than Camping World Truck Series!  I just think that this photo portrays the thoughts of some of our players as time is running out for this season.

Well, just take a minute to think about it race fans…  We have just six race left in the season, and for some there is a huge need to come into the pits to gas it up, bolt on four fresh “Feel Goods”, get a much needed chassis adjustment, grab a new water bottle for the driver, and try to make a late race charge to the top of the standings!

As of the checkered flag at Charlotte here is the 2016 season totals for each player.  Keep in mind that there are just six races left in the year, but nonetheless the numbers below will give everyone a glance at how they fare in the 2016 Championship bracket.  Remember that for the Championship bracket it is a winner takes all, a fatten up your bank account, and I own all the bragging rights for the off season as the 2016 Redneck Fantasy League Champion!

For the players who are in the top five places, there is hope for any one of them to make a run at the top position!  Could Edie make it two years in a row as our highest scoring player, or could we have a new players sitting at the top of the leaderboard when the checkered flag flies at Homestead?

For those of you who may be sitting down near the bottom of the scoreboard, it may be time to send out your “Mayday” request, because it is definitely an emergrency!