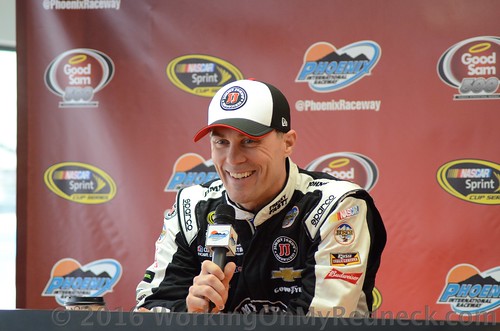 Kevin Harvick earned career win number 35 at Sunday’s Kansas Speedway event and locked in a Round of 8 berth in the Chase for the NASCAR Sprint Cup.

Claiming the lead on Lap 238, the No. 4 Stewart-Haas Racing wheelman refused to relinquish his first-place position, taking the checkered flag for the second time at Kansas, he won 2013’s fall race at the 1.5-mile track as well.

This week there was only one player, A&M Aggie Sue, who had selected Kevin Harvick as the winner.  For her great fortunes A&M Aggie Sue racked up 44 crucial points this week!

Not doing too badly this week was a quartet of players, Linda The Cookie Mom, Bernie The Bay Area Bandit, Lonna The Quilt Angel, as well as Bobby Blue Crush. All four of these players were riding the Carl Edwards bandwagon at Kansas, and they each logged a very nice 40 points.  Additionally, the 40 points scored by Bernie The Bay Area Bandit was enough to catapult her into the top position on the leaderboard and make her our new points leader!

After logging a single digit score at Dover, Karen The Extremely Opinionated Southern Belle has been making a comeback on the scoring sheet over the past two races.  This week was no different for her, adding 39 points to her segment totals from Kansas.

Meanwhile, Carlton The Doorman captured 37 points and remains near the top of the scoring pylon this week.

Rounding out the top five scorers this week is Leon The Retired Airline Captain, Part-Time Cardiologist and Strawberry Picker, as well as Your Most Humble Sheriff, receiving 36 points at the drop of the checkered flag.

There was wide scale movement on the leaderboard this week, and only player who held serve in their previous slot on the leaderboard was Carlton The Doorman in 6th place!  The other 21 players all exchanged places with someone this week.  To further clarify the movement, there are only six players who moved more than one spot this week.

The single largest mover from the Kansas race was Zee, aka Sissy, who cratered and fell eight (8) spots.  Last week Sissy was riding high in the last money paying position, 5th. However after the checkered flag at Kansas she is sitting in 13th place, a true fall from grace!

The rest of the fantasy league either moved up one spot or slid down one spot this week.

Even though most of the fantasy league players did relatively well this week, Jeremy The Coach was only able to scavenge up eleven (11) points and therefore wins hands down “The Crappiest Pick of The Week” award!

Carrying on the “crappy talk”, we finally have a new “Princess of The Poophouse” this week!  For the first half of this segment we have had just inhabitant in “The Outhouse”, Kathy The Church Forecloser.  But today Carole, aka Rudy, sent The Church Forecloser an eviction notice, got the authorities to serve that notice and escort her out, and in return she moved all her furnishings into “The Outhouse”!

For all of The Redneck Fantasy League players who are near the bottom of the standings, as well as the Chase drivers who are languishing near the cut off of the Chase standings and are hoping desperately that “they will be somebody,” I offer up this week’s video!

Next week it is off to Talladega for the wild car and elimination race for the Round of 12!