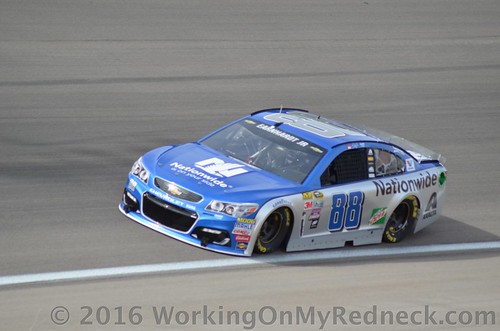 This week NASCAR makes its last trip to “sweet home Alabama” for 2016.  This is the biggest wild card race of the season.  Not only is this a wild car race, but it is also an elimination race for the round of 12!  The combination of these two facts really cranks up the angst and anxiety for the twelve drivers this weekend.

As the title suggests, this week the number 88 has the confidence of four players.  Those four players who will be rooting for Dale Earnhardt, Jr’s replacement, Alex Bowman, are Linda The Cookie Mom, Doug The Gandy Candy Dude, Skid-Marc, as well as Jeremy The Coach!

Following closely in popularity this week are three drivers, Joey Logano, Matt Kenseth, and “Blazingly Bad” Brad Keswelowski, each having a rooting section of three players each.  Betting the farm on Logano are Carlton The Doorman, Jim, aka Chiefy and Jason the Latent Tie Dye Hippie and All-Around Edgy Dude.

Dressing up in the Matt Kensenth fan garb this week are Lonna The Quilt Angel, Cole The On Demand Baseball Player, as well as David The Mudslinging Throttle Jockey.

Kes’ cheerleading group comprises of Kathy The Church Forecloser, Jerry The Buschwacker, as well as Dan The Numbers Cruncher.  Each one is really hoping that their driver can deliver max points to them and begin their run towards the top of the leaderboard.

Meanwhile, there are two drivers who have a couple of players each in their corner for Talladega.  First up is Kurt Busch, who is supported by Carole, aka Rudy, as well as Leon Your Most Humble Sheriff.

Lastly, both Edie The Las Vegas Super Star and Zee, aka Sissy will be crossing their fingers in hope of watching Carl Edwards drive his hot rod into Victory Lane and hoisting the hardware!

That leaves five players that are in bidnez for themselves this week!

As I mentioned in the opening paragraph of this post, the fall Talladega race is normally a very exciting race to watch, but now that NASCAR has gone to “the new playoff” system, this race has added another dimension to the already high level of tension to a restrictor plate race.