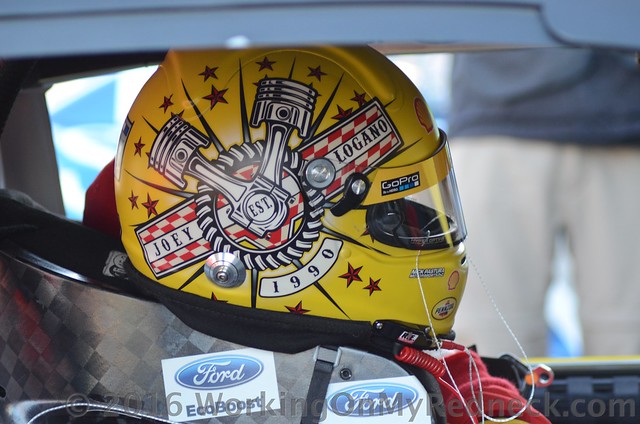 Logano powered the Team Penske No. 22 Ford to his second victory of the season, the 16th of his NASCAR Sprint Cup Series career and his second on the 2.66-mile Alabama track. Brian Scott scored a career-best second-place finish, with Denny Hamlin, Kurt Busch and Ricky Stenhouse Jr. rounding out the top five.

This was a very unusual Talladega race.  Without exception Talladega, as well as Daytona, will always produce massive crumpled sheet metal by the time the checkered flag flies.  However, that did not happen this time.  There were only three cars off the track and in the garage when the race ended, leaving 37 race cars racing when the checkered flag waved!  It is not that often that 37 cars can be driven into their respective haulers for the return trip to Charlotte!

The Talladega race saw three of our players score big, 44 points, when it was all said and done this week!  Carlton The Doorman, Jim, aka Chiefy, as well as Jason The Latent Tie Dye Hippie and All-Around Edgy Dude were riding shotgun with Joey Logano all race and grabbed the big number!

Not having the winner in her back pocket, but having a very nice race was A&M Aggie Sue, who scored a very respective 39 points for Denny Hamlin’s 3rd place finish.

Next on the scoring pylon is the duo of Carole, aka Rudy and Leon Your Most Humble Sheriff who were betting the farm that Kurt Busch would be able to win his very first career restrictor plate race. The victory was not to happen but they did rally up with 37 points for “The Former Outaw’s” 4th palce finish.

All day long William Clyde Elliott, Jr,, aka Chase, rode within the top ten, additionally he led 9 laps during the middle of the race.  It was not his day to win his first Sprint Cup race. Nevertheless, Karen The Extremely Opinionated Southern Belle scooped up 30 points from his 12th place finish.

Rounding out the top five scores of the week is Bernie The Bay Area Bandit, who selected Paul Menard.  I am not sure where the heck that pick came from!  But when I saw that pick I had some thoughts that we may be instituting pre-season drug testing for all Redneck Fantasy League players next year!  Notwithstanding that issue, The Bay Area Bandit snagged 28 points with her selection of Menard.

After tallying up the scores this week, it would appear that, once again, the players were dropped into a food processor or blender and then poured out!  There were only two players who maintained their place on the totem pole after the race ended, our leader Bernie The Bay Area Bandit and Dan The Numbers Cruncher.  The remaining twenty players all traded places with somebodyomn the leaderboard!

By scoring 44 points this week Chiefy rocketed up the leaderboad seven (7) spots and landed himself in 7th place with just four races left in the season.

Sitting second on the movers list is the duo of Leon Your Most Humble Sheriff and Doug The Gandy Candy Dude.  The Ol Sheriff climbed up five (5) places to land just outside the top five money positions, sitting now in 6th place and just 10 points form some Redenck Fantasy League dollars!  Meanwhile, The Candy Man slithered down in the standings five (5) spots to sit in 8th place.

Rising from near extinction earlier in the segment is Jason The Latent Tie Dye Hippie and All-Around Edgy Dude.  The Edgy Dude stepped up four (4) places this week, landing in 14th place.

Rounding out the top five movers is a group of six players, A&M Aggie Sue, Carlton The Doorman, Bobby Blue Crush, Skid-Marc, Linda The Cookie Mom, as well as Jerry The Buschwacker each moved three (3) positions after the race.  Aggie Sue and The Doorman had a good afternoon slipping up in the standigns three polaces to reside in 2nd and 3rd, respectively.  However, Blue Crush, Skid-Marc, The Cookie Mom, as well as The Buschwacker all stumbled and fell three places sitting now in 5th, 12th, 13th, and 15th , respectively.

This week we have one third of our fantasy league that will be sharing “The Crappiest Pick of The Week Award”!  I am not sure that we have ever had that kind of battle for this weekly award in our history!  There are seven (7) players who will be sharing this coveted award, Kathy The Church Forecloser, Jerry The Buschwacker, Linda The Cookie Mom, Doug The Gandy Candy Man, Dan The Numbers Dude, Skid-Marc, and Jeremy The Coach.

Speaking of Kathy The Church Forecloser, her microscopic 5 point total this week smartly steps back into, and in complete control of her familiar digs, “The Outhouse”!

As the haulers load up and head back to Charlotte there are a four teams the have had their “river of dreams” destroyed and eight others teams who are all in for the next segment of The Chase, The Round of Eight!

With Talladega, the longest race track on the circuit, in the books NASCAR travels Northeast to the smallest track, Martinsville.

TIL NEXT TIME, PULL YOUR GLOVES UP, FLIP YOUR VISOR DOWN, AND LET’S GO RACN’!