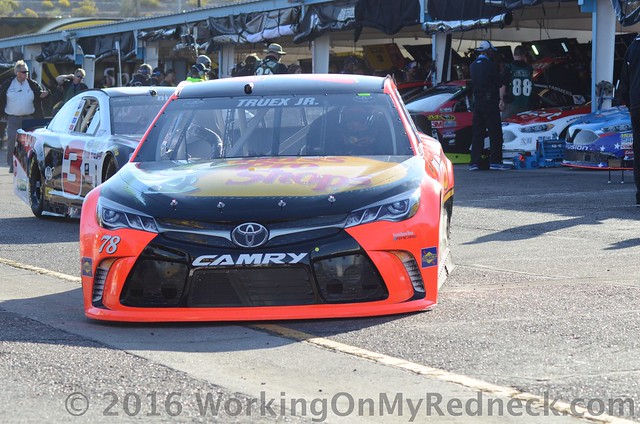 As the 2016 begins to wind down, there are now four races left, the hopes and dreams for some becomes a reality, while to some race teams and players as well, but for some the reality is” we will get them next year”!  The third segment money for the top five players is still in play!  Just to back up what I am saying, positions 1-5, the money paying positions are only separated by a total of seventeen (17) points with four races remaining.  That means that any of those five perople could easily be our segment winner!  Additionally, positions 5-9 are only separated by a total of of fourteen (14) points. Taking logic one step further, the first nine positions are separated bythirty-one (31) points!  With four races left that really measns that any of the top nine players could make a run towards the top and be successful in grabbing some money. Still another pocket of highly competitive players rest between positions 9 and 16.  That group of players are only separated by a sum total of thirteen (13) points.  So as you can see there are several pockets of really tight scores within the leaderboard!

The race for the Championship money is also still in play!  The top two scores are A&M Aggie Sue with 1,037 points and Edie The Las Vegas Super Star with 1,025 points and are in a tight second place. Sitting in third spo,t as of right now, is Carlton The Doorman with 1,009 points.  Leon Your Most Humble Sheriff is making a run to the top with a score of 1,001 points. Rounding out the top five scorers is Bobby Blue Crush with a total of 993 points.

Once again we have a tie between two drivers with the biggest rooting section.

This week we have three players, A&M Aggie Sue, Dan The Numbers Cruncher, as well as Cole The On Demand Baseball Player, all hanging in the Martin Truex, Jr cheering section.  Additionally, we have Lonna The Quilt Angel, David The Mudslinging Throttle Jockey and Skid-Marc putting all their collective marbles in Kyle Busch’s marble sack at Martinsville.

We have five drivers that have a two person rooting section!

Leading of the list those five drivers alphbetically this week would be Kurt Busch.  His gang of two consists of Jerry The Buschwacker and Bernie The Bay Area Bandit. The subsitute driver for Dale Earnhardt, Jr., which this week is Jeff Gordon, has attracted Snoopy Dawn and Karen The Extremely Opinionated Southern Belle as supporters.  Freaky Fast Kevin Harvick has Zee, aka Sissy and Bobby Blue Crush as gest pit crewmemebers.  Meanwhile Linda The Cookie Mom aand Doug The Gandy Candy Man are riding shotgun with Matt Kenseth.  Lastly, Jim, aka Chiefy and Leon The Retired Airline Captain, Part-Time Cardiolgist and Strawberry Picker, as well as Your Most Humble Sheriff are all in with Kyle Larson this week.

Once again this week we have those independent thinkers, six in total, who really are totally in bidnez for themselves!

This is the last short track race of the year, and we all know what possiblities that brings!  At this point in the race season there very well could be some paybacks, lost lost tempers, bruised egos and most definitely some crumpled sheet metal, when the checkered flag flies at Martinsville!  Anyone taking bets?

I can only say that at the end of the race, with all the emotions that could be flying from all of the crewmembers ,“Love Hurts”!

TIL NEXT TIME, PULL YOUR GLOOVES UP,FLIP YOUR VISOR DOWN, AND LET’S GO RACIN’!