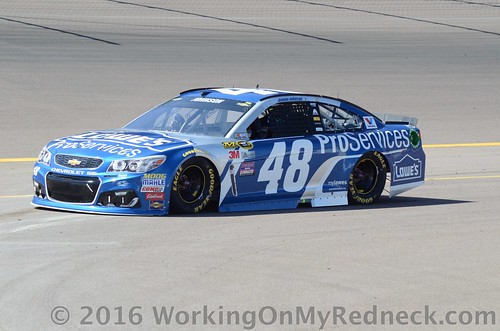 Jimmie Johnson earned win No. 79 Sunday at Martinsville Speedway, a race track that holds so much triumph, as well as an emormous tragedy for HMS, after topping the board for 92 circuits of the Goody’s Fast Relief 500. Similiar to the Round of 12, “Mr.Six-Pack” won the opening event in the three-race Round of 8.

Johnson is the only Chase for the NASCAR Sprint Cup contender with a guaranteed spot in the Championship 4, where he will vie for his seventh championship to tie Richard Petty and Dale Earnhardt, Sr. This marked the Hendrick Motorsports wheelman’s ninth trip to Victory Lane at the short track, equaling him with former teammate Jeff Gordon.

This award goes vacant this week, since not a single player was on the Jimmie Johnson bandwagon at Martinsville.

This week we have five players who share the highest scoring title.  Those five players include our new points leader Carlton The Doorman, Carole, aka Rudy, Edie The Las Vegas Super Star, Doug The Gandy Candy Man, as well as Linda The Cookie Mom, all adding 39 points to their totals.  Even though they all racked up the same tally, they all did not support the same driver this week!  In fact there were three different drivers who all scored 39 points this week, Denny Hamlin, “Blazingly Bad” Brad Keselowski, and Matt Kenseth.

Lonna The Quilt Angel, Skid-Marc and David The Mudslinging Throttle Jockey were rooting for “Rowdy”, aka Kyle Busch, and able to add 37 points to their scores!

The quintet of Snoopy Dawn, Karen The Extremely Opinionated Southern Belle, A&M Aggie Sue, Dan The Numbers Cruncher, as well as Cole The On Demand Baseball Player alll were able to put 35 points into their totals.  Both Snoopy Dawn and The Severely Opinionated One were hanging out with Dale Jr’s replacement driver, Jeff Gordon.  Whereas Aggie Sue, The Numbers Dude and The On Demand Baseball Player were betting the farm on Martin Truex, Jr. today.

Over the course of this segment there has not been a whole lot of great news generated by the newbie, Kathy The Church Forecloser!  However, this week she was able to put a very nifty 33 points into her column and close down the huge deficit between her celler dewlling performance and her closest competitor for that ever coveted “Outhouse Award”!  This week she was able to narrtow down that deficit to just three (3) points between her and Jeremy The Coach, with just three races left!

Rounding out the top five scores in week nine includes the duo of Jim, aka Chiefy and the youngest of the Hammack sibblings, Leon Your Most Humnble Sheriff.  Both players were rooting for “Young Money”, Kyle Larson, and were rewarded 28 points for his finish at Martisville.

This week only six players remained in their previously assigned positions, meaning that 16 players changed places this week.  The single biggest mover this week was Zee, aka Sissy who plumetted five spots, falling to 16th place this week!

Five players moved two (2) places this week.  Carlton The Doorman, Linda The Cookie Mom and Carole, aka Rudy all stepped up two (2) spots on the leaderboard to sit now in 1st, 11th, and 19th, respectively.  While both Jerry The Buschwacker and Jeremny The Coach stumbled two (2) places to sit in 17th and 21, respectively!

Four players moved next door one spot.  Snoopy Dawn stepped up one place, while Bobby Blue Crush, Leon Your Most Humble Sheriff and Jason The Latent Tie Dye Hippie and All-Around Edgy Dude all lost one spot on the totem pole this week!

This week’s winner of “The Crappiest Pick of The Week” goes to Jeremy The Coach who showed his prowess of adding just 5 microscopic points to his segment tally!  And stop me if you have heard this sentence before, Kathy The Church Forecloser sits all alone on throne of “The Outhouse” again this week!  The good news is that she narrowed the point differential from 20 points to herclosest rival down to just three (3) points.  It appears that Jeremy The Coach is making a very late segment charge to the bottom of the totem pole trying to evict our third segment cellar deweller!

After 500 miles of beating, banging, and bruised egos at Martinsville, next week NASCAR unloads just north of Fort Worth,Texas, at the Texas Motor Speedway, just a mile or two northwest of Alliance airport!

“Does Forth Worth ever cross you mind?”