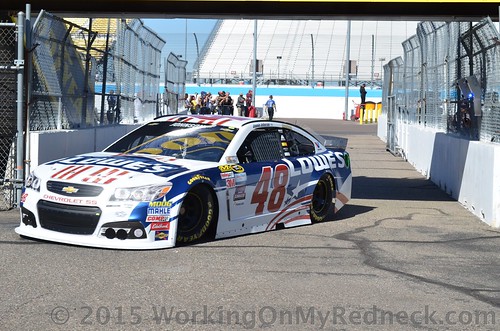 With just three races left in the 2016 season, and the haulers head for the Texas Motor Speedway, the third segment tightens among the top scoring players for the final Redneck Fantasy League paycheck. Additionally, the winner take all Championship paycheck is still up for grabs, with any of the top five scoring players still in the hunt!

This week we have five players, Snoopy Dawn, Dan The Numbers Cruncher, Edie The Las Vegas Super Star, Karen The Highly Opinionated Southern Belle, as well as Leon Your Most Humble Sheriff who are pushing it all in for “Mr. Six-Pack”, Jimmie Johnson, this week at the high banks of the Texas Motor Speedway.

Almost not out done this week is Denny Hamlin, who has four players in his corner for Texas.  Those four players in Hamlin’s corner this weekend include Kathy The Church Forecloser, Zee, aka Sissy, Skid-Marc, and lastly Jason The Latent Tie Dye Hippie and All-Around Edgy Dude.

There are three drivers that have a cheering section of two players each.  The first driver, alphabetically, is “The Shrub”, aka Kyle Busch.  The Shrub’s rooting section consists, oddly enough, of Jerry The Buschwacker and Jeremy The Coach.

Both A&M Aggie Sue and Doug The Gandy Candy Man will be teaming up together to support “Cousin” Carl Edwards in his attempt to punch his ticket to the championship race at Homestead.

Lastly, Carlton The Doorman and Lonna The Quilt Angel are partners in rooting for the “Freaky Fast” Kevin Harvick as his back is up against the wall to try to advance to “The Round of Four” at Homestead.

After doing basic math, once again, that leaves seven players who are truly independent thinkers and most definitely are in bidnez for themselves at Texas!

I am quite sure that all players are really hoping that their selected driver will be heading “straight on” to the checkered flag and will drive “straight on” to Victory Lane for a big celebration Sunday!