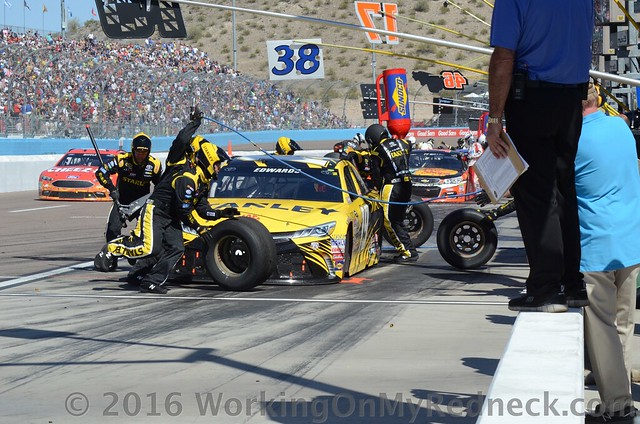 Edwards’ Joe Gibbs Racing No. 19 Toyota permanently took the lead in the 258th of 293 laps, after his pit crew busted off a sub 12 second pit stop. A late evening rain shower shortened the race from the original 334-lap distance. He led 36 laps in his third NASCAR Sprint Cup Series victory of the season, the 28th of his career and his fourth on the 1.5-mile Fort Worth track.

Edwards’ victory locked up an automatic berth in the Chase for the NASCAR Sprint Cup playoffs’ Championship 4 finale Nov. 20 at Homestead-Miami Speedway. Jimmie Johnson — the Martinsville winner last weekend — is the only other driver among the eight remaining Chase hopefuls who has clinched a title shot.

Once again we have a new person atop of the leaderboard, A&M Aggie Sue inched her way from second place to week number 10 leader!

This weekly award is given to two of our players, Doug The Gandy Candy Man, as well as our new late segment leader, A&M Aggies Sue.  Both players were riding high with “Cousin Carl” Edwards this week when the rain came, the race was halted, Edwards was awarded the victory at Texas, and they received 44 points!

There were two drivers Sunday that had a cheering section of two players each, betting the farm that their pick would win the race.

Both Jerry The Buschwacker and Jeremy The Coach had a really great Texas race, scoring 37 points.  Both players were were riding shotgun with “The Shrub”, Kyle Busch, on Sunday.evening.

Similarly, Kevin Harvick had a duo, Carlton The Doorman and Lonna The Quilt Angel, on his side.  This unlikely pair racked up 35 points at Texas when the rain came and the race was stopped.

Additionally, there were five players who locked down the fourth highest score for the race, with two different drivers giving them their great results.  For Kathy The Church Forecloser, Zee, aka Sissy, Skid-Marc, as well as Jason The Latent Tie Dye Hippie and All-Around Edgy Dude, their 33 points came via Denny Hamlin’s 11th place finish.  However, Bobby Blue Crush had his chips all in for Kasey Kahne, and he delivered a good day for him.

Rounding out the top five scorers this week is Linda The Cookie Mom.  The Cookie Mom grabbed 31 much needed points from her pick, Ryan Newman.

There are three different places on the leaderboard where there are ties between players.  That fact, if you look thoughout the standings, indicates there are pockets of competition.  And with just two races left, it supports the idea that there are still positions up for grabs!

There was not much movement this week, other than to tighten up the standings in certain groups, as the season winds down.  The single largest mover was Jason The Latent Tie Dye Hippie and All-Around Edgy Dude moving up just two (2) places this week!

This week Carole, aka Rudy, was unanimously awarded “The Crappiest Pick of The Week” with her whopping 10 points!  Now stop me if you have heard this lately, Kathy The Church Forecloser is standing guard in “The Outhouse” once again this week!  However, her overwhelming dominance of “The Outhouse”, this segment, has been something that we have not seen in the recent past.  But I will note that her closest competitor, Jeremy The Coach is just seven (7) points from evicting her out of “The Crapper”!  Could there be a party in Peachtree when she escapes for “The Outhouse”?

With just two races left in this segment and the season, Phoenix and Homestead should be very intriguing, to say the least!

Next week Leon Your Most Humble Sheriff will be hanging out in the media center, the garage area, and all around the race track, so there should be some interesting observations that will surface after Phoenix!

One thing that is a relative sure thing, there will be an extremely low possiblity of rain delays at PIR!  All though there was a rain delay last year, I can reasonalby assure you that was an anomaly!

Good luck to all at Phoenix!