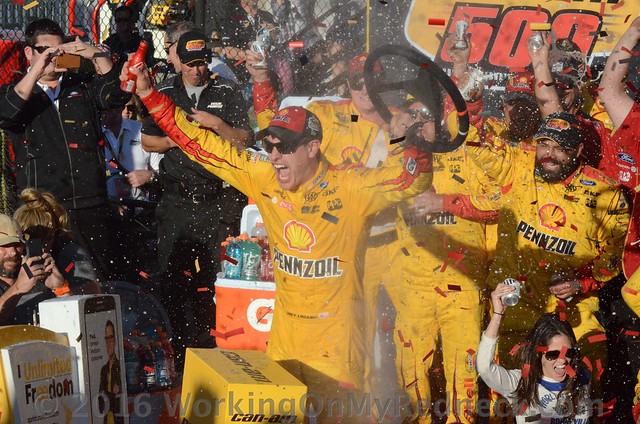 Joey Logano earned a return trip to the Championship 4 at Homestead-Miami Speedway after a year’s absence.

Kyle Busch will head to the South Florida track to try to defend his 2015 NASCAR Sprint Cup Series title.

And Kevin Harvick won’t be competing for the title for the first time since NASCAR debuted its elimination Chase format in 2014. Needing a victory to advance, as it turned out, Harvick finished fourth in Sunday’s Can-Am 500 at Phoenix International Raceway.

In a race that featured spectacular side-by-side racing and a substitute driver who dominated the first 250 laps of the event after starting from the pole, Logano beat Busch to the finish line by .587 seconds in the second of two overtimes.

Logano’s first victory at the one-mile track couldn’t have been timelier. The win – his third of the season and the 17th of his career – gave Logano an automatic berth in the Championship 4 race, set for next Sunday.

After spending all weekend at Phoenix International Raceway I did not see any familiar faces riding shotgun in the Pennzoil No. 22 Ford Fusion that race winner Joey Logano was driving. Therefore this award goes vacant this week!

This week we had two players really swinging for the fence, Bobby Blue Crush and Zee, aka Sissy.  Each player participated in “the ride along” program with “The Shrub”, Kyle Busch, at Phoenix.  For that wild ride they each secured 39 points, and was the highest scorers of the week.

Right behind those two players on the scoring pylon was Linda The Cookie Mom.  The Cookie Mom was supporting “Young Money”, Kyle Larson, and that leap of faith was worth 38 crucial points at Phoenix,

Next we have a small gaggle of players that tied for the third highest scoring honors of the week.  That small gaggle includes Jim, aka Chiefy, his better half Edie The Last Vegas Super Star, as well as Leon Your Most Humble Sheriff.  All three players were riding shotgun with “Freaky Fast” Kevin Harvick and logged an all important 37 points.

Next was a quartet of unlikely players, Snoopy Dawn, her “mouth-piece” Carlton The Doorman, A&M Aggie Sue and Skid-Marc banding together and scoring 36 points.  Those points were the results of putting all their marbles into the marble sack of Kurt Busch, formally know as “The Outlaw”.

Bringing up the rear, or as I normally put it, rounding out the top five scorers this week, are Kathy The Church Forecloser and Lonna The Quilt Angel.  Both of these ladies logged 35 points, however the results come from two different drivers!  The Church Forecloser was hanging with the replacement driver for Dale Earnhardt, Jr., Alex Bowman.  Bowman dominated the race and could have very easily won the race, but it was not to be!  Meanwhile, The Quilt Angel had her money on Denny Hamlin at PIR.

As the segment nearly runs it’s couse, there was wide spread movement, but in small increments this week.  Six of the players remained in their previous spots, while sixteen players either slide up a little or fell down a little on the leaderboard.

Following the Candy Man on the movement board was David The Mudslinging Throttle Jockey, who like his fellow dirt track racer did not have a very good day at Phoenix.  The Throttle Jockey had a partial “crater”, sliding dfown the totem pole four (4) spots and slid into 18th placed this week.

Conversely, both Zee,aka Sissy and Jerry The Buswchwacker had a moderately good Sunday, stepping up three positions now residing in 13th and 14th, respectively.

The next quartet had a mixed Phoenix race.  Both Bobby Blue Crush and Linda The Cookie Mom stepped it up!  Yes they stepped it two places to sit it 4th and 10, respectively.

The remaining seven players either slid up one spot or slid down one spot after Phoenix.

Our honoree for “The Crappiest Pick of The Week” award belongs to Doug The Gandy Candy Man, who showed his pick prowess by selecting a normally outrstanding pick, except this week, Jimmie Johnson.  This week ol Mr. Six-Pack only yielded 4 points for the Candy Man!

We have a new “Prince of The Poohouse“, “Warrior of The Water Closet”, “Guardian of The Gashouse“, and/or Ogre of The Outhouse!  It took a very huge effort to evict Kathy The Forecloser, but Jeremy The Coach has kicked her out of “The Outhouse“!  The Coach got a huge run on her, or did he just get a huge case of “the runs”?  I am not sure which it is!  But he has not only evicted her, but did it withy great flair!  He has 24 point cushion with just one race left in the year!

Next week the season ends with Championshop Weekend at Homestead!

Good luck to everyone!

For those of us who are the fringe of the money paying positions in the fantasy league, we are just hoping to have a great race so that we are “staying alive” at the end of this segment! “Well you can tell by the way I use my walk………..”