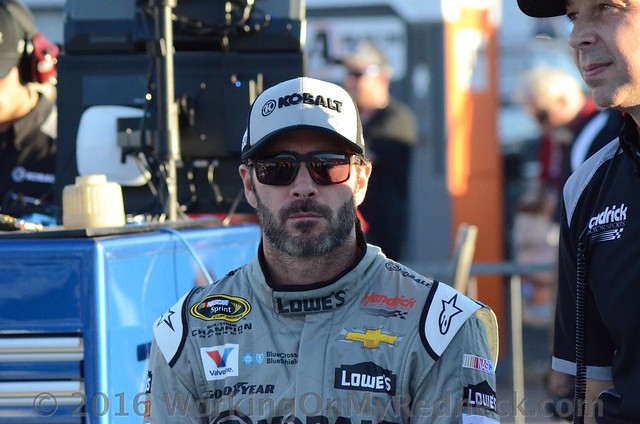 The 41-year-old driver captured his seventh Sprint Cup championship — and his first in three years — by winning the Ford EcoBoost 400 on Sunday at Homestead-Miami Speedway.

Johnson joins Richard Petty and Dale Earnhardt as a seven-time premier series champion, the most by any driver. It is Johnson’s first title since 2013, and his first with this current Chase for the NASCAR Sprint Cup format that began in 2014.

Johnson also becomes the youngest seven-time winner; Petty was 42 when he amassed his seventh title in 1979 while Earnhardt was 43 in 1994 when he completed the feat.

The title comes after one of Johnson’s most difficult seasons, when he endured the longest winless stretch (25 starts) of his career. However, he picked up wins at Charlotte and Martinsville during the Chase, in addition to Sunday’s win at Homestead-Miami.

This is the first time in a long time that the winning driver did not score the most points!  Kyle Larson, because of his race dominance of leading the most points –132 laps– scored the most points. Snoopy Dawn as well as Lonna The Quilt Angel were rolling the bones with “Young Money” this week and were rewarded very well with a cool 41 points!

There was a trio of players, Kathy The Church Forecloser, Dan The Numbers Cruncher and Skid-Marc who were putting all their collective marbles into “Freaky Fast” Kevin Harvick’s sack for Homestead.  That intuitive guess paid off with a vey nice 39 points!

Bernie The Bay Area Bandit and Part-Time Stalker thought that ol “Rowdy”, Kyle Busch, could go back-to-back and repeat as Sprint Cup Champ.  It wasn’t to be his day, but she did gather up 35 points to end the season.

Rounding out the top five scorers was Linda The Cookie Mom who grabbed 32 points from Denny Hamlin’s finish at Homestead.

For the last race of the segment there was, once again, wide spread movement on the leaderboard.  Seventeen of the twenty two players changed places when the checkered flag flew at Homestead.

The single biggest movers this week is an unlikely trio of players.  That group includes Skid-Marc, Doug The Gandy Candy Man, as well as Leon Your Most Humble Sheriff. Skid-Marc faired the best of the trio moving up four spots ending up in 7th place.  Conversely, both Leon The Retired Airline Pilot, Parti-Time Cardiologist and Strawberry Picker and Doug The Gandy Candy Dude slithered down the totem pole four places to rest in 10th and 13th, respectively.

There were two players who moved two positions this week.  Lonna The Quilt Angel climbed up two places to finish out the segment in 15th place, while Jerry The Buschwacker plummeted two spots to land in 16th place.

The remaining players either moved up one spot or dropped one spot to cap off this segment.

It was a very close race between four players to see who would secure “The Crappiest PIck of The Week” award.  Jeremy The Coach, Karen The Highly Opinionated Southern Belle and Leon Your Most Humble Sheriff all logged a single digit score.  However, Doug The Gandy Cand Man could only gather up a microscopic score of 5 points, and therefore wins “The Crappiest Pick of The Week” award for the last week of the season.

Even though Jeremy The Coach did not score the least amount of points this week, his 6 points cemented his place in “The Outhouse”!  So he will be staring at “The Outhouse Award” for the off season, as well as the first segment of 2017!

We have witnessed a slice of history with Jinnie Johnson’s seventh Sprint Cup Championship!  If nobody believes that this was a fete fitting of Superman, then sit back an look at the stats. Jimmie Johnson is the youngest of the three who have won seven championshps, just 41 years old!  King Richard was 43 years old and Dale, Sr. was 42 years old when they won theirs. Who knows, there could be at least one more championship within JJ’s gas tank!  Then we all could truly call him “Superman” for sure!

I wish you all a great Holiday Season, a Happy Thanksgiving, a Merry Christmas, and very Happy and Prosperous New Year!

It is just 99 days til they fire the engines up for the Daytona 500!  For the first time in about 10 years, I will be sitting at home for the 2017 Daytona 500, strapped into my comfy suffed chair and watching on my TV!