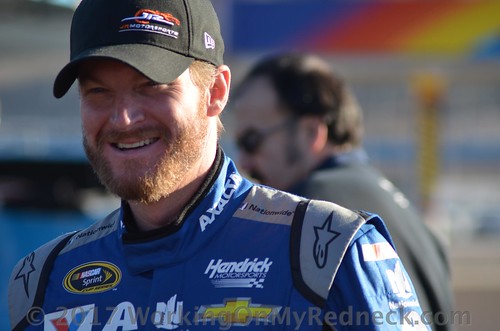 It is just past the middle of February and that can only mean one thing.  It is time to bring the NASCAR circus to town, or as I would say it is time to “let the big dog eat at Daytona”!  It has been a looooong quiet “off season” for me, and maybe for a few of you as well!  But fear not Rednecks, beginning Thursday the haulers will unload their bounty at the former mud bog, there will be a concert at Daytona International Speedway that comes in eight part harmony!  Those Chevys, Fords and Toyotas will be singing a type of harmony that neither The Eagles, The Beatles, The Four Tops, ABBA, nor The Mormon Tabernacle Choir could ever match!

Even though “The Pied Piper of Plate Tracks”, Dale Earnhardt, Jr., missed the last 18 races for 2016 due to a closed brain injury, or as it was referred to in the press as concussion like symptoms, fear not Junior Nation, he is back and fully energized.  When I was at Phoenix for the NASCAR test at the end of January, Dale Jr., as well as Kevin Harvick, Daniel Suarez, and Erik Jones, made themselves available  to the media for a Q and A session.  However, it was Dale Jr. who was the most excited about getting back into a race car.  It was Junior that had a Cheshire cat smile the whole time while answering the media’s sometimes repetitive questions.  It was Dale Jr. who was giddy and acting like a kid in a candy store.  Take it form me, Earnhardt is like a caged animal ready to bust loose and get after it!

Having said all that from personal observation, it fired me up that he would be a viable pick for the restrictor plate tracks of Daytona and Talladega, as well as any of the other race tracks this year.

After uploading our picks for the first segment I was glad to see that many of the players still have some love in their hearts for Dale Jr.  For the very first race of 2017 six of our players, nearly 1/3 of the Rednecks, are putting their money where their mouths are.  Let us take a closer look at just who are hoping to jump out into the lead with Dale Earnhardt,Jr.  It is a motley crew that have banded together to support the 14 time most popular driver.  Take a look at this group and see what ties them all together. Leading this group is most likely the most vocal of the group in the person of Karen The Highly Opinionated Southern Belle. Joining her in support of Junior Nation this week is Zee, aka Sissy, Jerry The Buschwacker, Kathy The Church Forecloser, Cole The Gamer, and of course yours truly, Leon Your Most Humble Sheriff.

There are four drivers that have a cheering section of two players each for Daytona.

First out of the shoot for the opening race is Matt Kenseth with his support group of Lonna The Quilt Angel and Edie The Las Vegas Super Star.

Carlton the Doorman and Dan The Numbers Cruncher comes out with their guns a blazing for  the 2015 Cup champion, “Rowdy” Kyle Busch.

Likewise, both Linda The Cookie Mom and Jim, aka Chiefy are remembering that Martin Truex, Jr. narrowly lost the 2016 Daytona 500 by about 12 inches to Denny Hamlin.

And rounding out the group choices are Doug The Gandy Candy Man and A&M Aggie Sue who are riding shotgun with the 2016 Cup champion, “Mr. Seven- Time”, Jimmie Johnson.

Now as you may recall from past years I am not one to do math in public, nevertheless, there were 14 players who were team members for this race.  That leaves seven players who, obviously, pride themselves on being “in bidnez for themselves”!

It is good for me to back in the saddle again and I wish you all good luck this weekend at Daytona!

May your “driver” bring the circus to town and allow you to celebrate in Victory Lane Sunday evening!