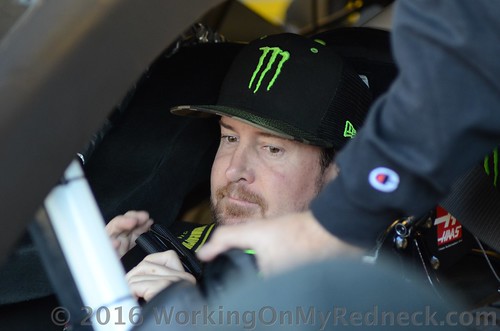 His car damaged in a wreck on the backstretch and held together with bare bond and speed tape, Kurt Busch grabbed the lead on the final lap of the 59th Daytona 500 on Sunday and took the checkered flag in the Great American Race as a capstone to a checkered career that has trended upward since Busch joined Stewart-Haas Racing in 2014.

In a race that featured the first test of a new three-stage race format in the Monster Energy NASCAR Cup Series — and featured enough twisted sheet metal to keep fabricators busy for a month of Sundays — Busch surged to the front with a run around the high side of Kyle Larson when more than half the vehicles in an 11-car lead draft sputtered and ran short on fuel.  It appeared that this was a contest of endurance, the ability of “staying alive”!

Having pushed other drivers to victory in the 500 on three previous occasions, Busch took the prize himself this time, finishing .228 seconds ahead of Ryan Blaney, who came from the rear of the lead pack on the final two laps.

Well in light of the destruction derby all weekend at Daytona, not a single person had the foresight to select the driver formally known as “The Outlaw”, now making a name for himself as Kurt Busch!  So in week number one this award goes empty!

As it happens quite often at restrictor plate races, there are winners and big losers.  This weekend at Daytona there was no exception to that allegory!  The big winner this weekend was ol Snoopy Dawn!  She was the only player who selected Joey Logano right out to the box, and was rewarded with a very nice 40 points.

Also having a good weekend at Daytona was Jeremy The Coach, who was riding shotgun with “Freaky Fast” Kevin Harvick.  Harvick, driving the new Stewart-Haas Jimmy John’s No.4 Ford Fusion, finished 22nd place while scoring some very valuable stage points that added to his overall race points.

We have a very unlikely trio of players that are tied in third place to start off this segment.  That trio consists of Bobby Blue Crush, Linda The Cookie Mom, and Jim, aka Chiefy.  They all gathered up 24 points after Daytona, however, they came about that total from two different drivers..  Killimanjaro Bobby was the lone player who was stowed away inside “Blazingly Bad” Brad Keselowski’s  Mille Lite beer wagon.  While both Chiefy and Cookie Mom were rooting for Martin Truex, Jr. today.

Two players were putting all their marbles into the marble sack of “The Shrub”, Kyle Busch.  Even though Kyle didn’t finish the race very high, taking the checkers in 38th place, he was still able to grab some of those valuable “stage points” to help ameliorate his final results at Daytona.  Both Carlton The Doorman and Dan The Numbers Cruncher skated having a totally awful day, and had just a moderately mediocre day scoring 11 points.

You know that most of the players had a very ragged day at Daytona when the 5th highest scorer managed a single digit total!  Nevertheless, ol Skid-Marc was fifth on the scoring pylon today with a grand total of 9 points!  He was brazen enough to pick Clint Bowyer right out of the starting gate with his new ride driving the Stewart-Haas Racing No.14 Ford Fusion, Smoke’s former ride.

Since this week is the first race of the season The Crappiest Pick of The Week and The Outhouse Award will be awarded simultaneous.  We have a duo, Lonna The Quilt Angel and Edie The Las Vegas Super Star, who were backing Matt Kenseth to win his third Daytona 500.  It was not to be this year and Kenseth finished the race in 40th place, giving those two ladies just 1 microscopic point this week.  Thank God that The Outhouse can be configured to accommodate more than one player at a time!

After a week of massive amounts of crumpled sheet metal and the teams and drivers just trying to “stay alive”, next weeks will hopefully be much different!  The racing shouldn’t be a clustered pack of angry bees!

Th race team haulers will have a much shorter tow, just head south on  I-85 to Hampton, GA, and the Atlanta Motor Speedway.

I will leave you with this…….

“Well, you can tell by the way I use my walk
I’m a woman’s man: no time to talk
Music loud and women warm, I’ve been kicked around
Since I was born!”