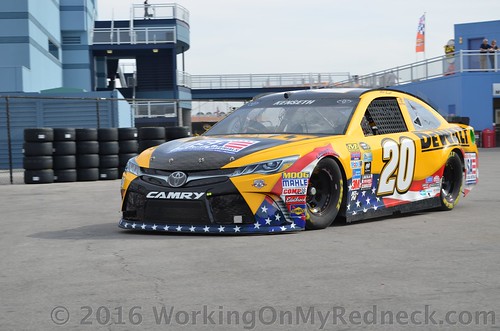 After witnessing the “Daytona Destruction Derby” last weekend, this weekend the NASCAR show moves 408 miles Northwest to the countryside of Hampton, Georgia. Hopefully the massive pile of crumpled sheet metal that was the results of the new race “enhancements” will not be repeated this weekend a thet Atlanta Motor Speedway!

On the positive side, the weather forecast looks simply splendid weekend for racing with highs in the low 60’s  and lows in the 30’s.  More importantly, there is no mention of rain for Thursday through Sunday, however there is a 50% chance of rain on Monday.

As this post headlines, both Jimmie Johnson and Matt Kenseth seem to be the co-favorites among the fantasy league this week at Atlanta.

It has been reported by sources close to this investigation that the three supporting Matt Kenseth, Linda The Cookie Mom, Jim, aka Chiefy and Bernie The Bay Area Bandit and Password Genius have been observed with their DeWalt cordless tools at the ready!  Although it is till an ongoing investigation, my sources are not sure what the significance of those three keeping their power tools strapped to their hips and at the ready!

There must by a DIY (do-it-yourself) war going on among the players!  Snoopy Dawn, Dan the Numbers Cruncher, as well as Leon Your Most Humble Sheriff were spotted slithering into Lowe’s yesterday in the very wee hours.  Through some super sleuth practices by our undercover P.I. they were spotted packing up their vehicles with with items for some kind of home improvement projects!  Could there be any correlation between their support for Jimmie Johnson this weekend?  I’m just saying…..

There are five drivers that have a rooting section of two players each this week.

Leading off this pack of rooters would be Zee, aka Sissy and Karen The Highly Opinionated Southern Belle who are going to be hanging with Kyle Busch and pounding down all those M&M’s all weekend!

“Freaky Fast” Kevin Harvick has attracted Carlton The Doorman and A&M Aggie Sue onto his bandwagon this weekend, but again it is suggested by reliable sources that he was using some of the Jimmy John’s sandwiches as an enticement!

Skid-Marc and David The Mudslinging Throttle Jockey are banding together to aide and abet Joey Logano at Atlanta in his search for a win at that facility.

Lastly, it appears that the father and son duo of Jeremy The Coach and Cole The Redneck Understudy are “lock-step” in their support for the 2017 Daytona 500 winner, Kurt Busch.

TIL NEXT TIME, PULL YOUR GLOVES UP, FLIP YOR VISOR DOWN, AND LET’ GO RACIN’!