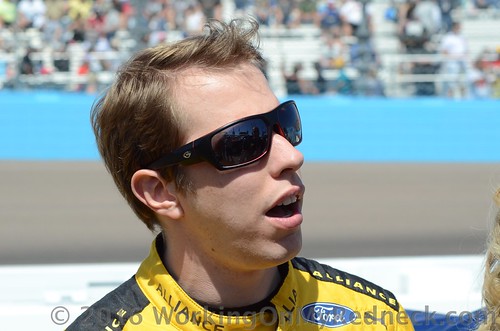 “Blazingly Bad” Brad Keselowski overcame a loose wheel issue, a dominant No. 4 Ford of Kevin Harvick and held off Kyle Larson late for the victory in the Folds of Honor QuikTrip 500 on Sunday at Atlanta Motor Speedway in the second race of the 2017 Monster Energy NASCAR Cup Series season.

Keselowski passed Larson with seven laps to go and held off the hard-charging fourth-year driver for the win. The win is Keselowski’s first at Atlanta and the 22nd of his career. The Team Penske driver led 21 laps on the day.

The dominance of Harvick was the story for much of the day as he led 292 of the first 311 laps of the 325-lap race. He won both stages and earned two playoff bonus points on the day.

The new NASCAR scoring system is a little hard getting used to for your Most Humble Sheriff, as I am sure that it is for you as well.  Nevertheless, it will be something that we all will get used to as the season progresses.

The highest scoring player this weekend was Lonna The Quilt Angel.  The Quilt Angel brazenly put her money all on the driver of the HMS No. 24 Napa Chevy, William Clyde Elliott, Jr., aka Chase.  For her brave venture this early in the season, The Quilt Angel scored a very nice 49 points!

Not far behind The Quilt Angel on this week’s scoring pylon are Carlton The Doorman, Carole, aka Rudy and A&M Aggie Sue.  All three of these adventurous souls racked up a nifty 48 points via Kevin Harvick’s dominating work at Atlanta.

Also having an equally good weekend was Skid-Marc and David The Mudslinging Throttle Jockey!  Both Skidz and The Mudslinger were riding shotgun with at Atlanta with Joey Logano and added 37 points to their early segment tally.

Rounding out the top five scores this week were Linda The Cookie Mom and Jim, aka Chiefy each racking up 34 points from Matt Kenseth.

Since it is very early in the segment, and since we just had a complete demolition derby at Daytona whereby many of the player got hurt severely with microscopic scores, it is safe to understand why there was such a huge amount of movement in the scoring pylon this week!

There were two players who had double digit moves within the the totem pole after Atlanta!  Lonna The Quilt Angel had the best results of anyone!  When the checkered flag flew she moved up the scoring pylon ten (10) spots escaping from the Outhouse and now residing in 11th place.  Conversely, Dan The Numbers Cruncher dropped like a bad habit ten (10) places to land in 18th spot this week.

Having nearly as disastrous of a race was Leon The Retired Airline Captain, Part-Time Cardiologist and Strawberry Picker, and definitely Your Most Humble Sheriff.  After the checkered flag fell and the dust settled, The Retired Airline Captain inadvertently got sucked into a power off stall that evolved rapidly into an inverted flat spin!  Having to dig extremely deep into his bag of flying skills, he was able to recover just prior to impact and narrowly escaping with his life! Notwithstanding all this drama, with the loss of nine (9) spots he found himself on the throne of The Outhouse as he changed his undergarments!

Three players moved eight (8) places this week.  Both Carole, aka Rudy, as well as A&M Aggie Sue climbed up the scoring ladder this week landing in 8th and 9th place, respectively.  Meanwhile, Karen The Highly Opinionated Southern Belle has made a very serious run towards The Outhouse, free falling eight (8) places now resting on the doorsteps of The Outhouse, in 19th place!

Lastly Zee, aka Sissy, stumbled and fell six (6) places to be in a tie with The Opinionated One in the 19th place.

In actuality all of the players had a reasonably successful race.  You know that to be so when the lowest score for the week is 19 points.  Nevertheless, there were three players who will be saddled with “The Crappiest Pick of The Week”!  Those three players, Dan The Numbers Dude, Snoopy Dawn and Leon Your Most Humble Sheriff, all picked the driver who won the last two Atlanta races, Mr. Seven-Time Jimmie Johnson.  Unfortunately for those three there was only 19 points given to them for JJ’s lackluster performance at Atlanta.  So it was a three-way tie for “The Crappiest Pick of The Week”!

You may have figured it out, but it is with some trepidation that I have to inform you that Your Most Humble Sheriff is now in firm control of The Outhouse!

Next week NASCAR begins its West Coast swing and Your Most Humble Sheriff will be hanging with the trained professionals in the Media Center at both Las Vegas and Phoenix!  Please do not put out any press releases exposing my ineptness as a write or photographer, they will cast me out of their click!

For all of us who did not fair too well at Atlanta and are shedding some tears that may be confused with “a rainy night in Georgia”, it is time to move west!

Good luck to all at Las Vegas!