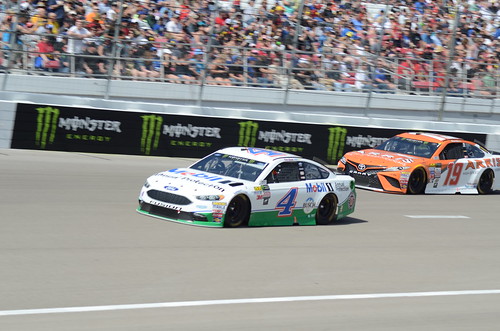 (photo courtesy Leon Hammack)
This week the NASCAR circus moves from Las Vegas 299.7 miles to the Southeast and unload their hot rods in The Valley of The Sun, which includes  the Phoenix International Raceway in Avondale, AZ.  This is the second stop on the 2017 NASCAR Western Swing and promises to be a very exciting race weekend at this 1 mile bullring.

It appears that some of our players have done their homework.  After checking out some stats it shows that “Freaky Fast Kevin Harvick” has won 6 of the last 9 races at PIR!  With a total of 6 of the 21 players, nearly 1/3 of the group, that have put all their marbles into Kevin Harvick’s marble sack this weekend! Those six players hanging with Harvick include Dan The Numbers Cruncher, Edie The Las Vegas Super Star, Jim,aka Chiefy, Jerry The Buschwacker, Karen The Extremely Opinionated Southern Belle, as well as Leon Your Most Humble Sheriff.

Snoopy Dawn, A&M Aggie Sue, as well as David The Mudslinging Throttle Jockey are hoping that the “not so Rowdy” Kyle Busch has recovered from an ill timed confrontation with Joey Logano and the entire Team Penske pit crew and could possibly lead the pact to the checkered flag Sunday.

Likewise, there are three players, Carole, aka Rudy, Doug The Gandy Candy Man and Skid-Marc who are backing the elder Busch brither formally known as “Outlaw”, Kurt.  All three players are hoping that the 2017 Daytona 500 winner can find Victory Lane at PIR.

Lastly, Kathy The Church Forecloser and Bernie The Bay Area Bandit are hoping that “Blazingly Bad” Brad Keselowski can grab his second victory of the season.

That leaves a large group, seven players in all, that are in bidnez for themselves this week!

By the time I get to Phoenix you will be reading this post!  Because once again I will be hanging out in the media center, garage and pit road for the weekend!