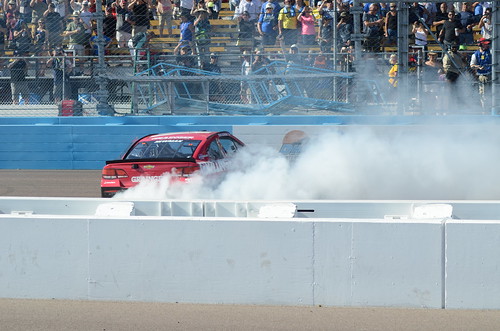 Staying out on old tires for a two-lap overtime run at Phoenix Raceway, Ryan Newman pulled away when eventual fourth-place finisher Ricky Stenhouse Jr. (who stayed out during the final caution) and runner-up Kyle Larson (who pitted for two tires) got together in the first corner after the final restart on Lap 313.

Newman’s 18th career victory was his second at Phoenix but his first since he won the Brickyard 400 on July 28, 2013, driving for Stewart-Haas Racing. The win was RCR’s first since Kevin Harvick took the checkered flag on Nov. 10, 2013 at Phoenix before departing for Stewart-Haas the following year.  Newman broke his 127 race winless streak by winning the Camping World 500 at PIR.

This week Bobby Blue Crush stand as the sole recipient of this weekly award.  Kilimanjaro Bobby boldly went where no man or woman dared to go selecting “No Neck” Ryan Newman to win the race, and was rewarded 42 points.

With the new point system that NASCAR has come up, stage racing for points, with the points for winning races, not always will the race winner be the highest scorer of the race!  Such was the case this week.  Kyle Busch scored the most points this week logging 47 pints.  That is great news for David The Mudslinging Throttle Jockey, A&M Aggie Sue, as well as Snoopy Dawn.

Both Kathy The Church Forecloser and  Bernie The Bay Area Bandit racked up a tidy sum, 46 points, while participating in the Brad Keselowski “Ride Along Program” at Phoenix!

Bobby Blue Crush hit one out of the park choosing Ryan Newman at Phoenix.  However, Blue Crush was not the highest scorer, but did log 42 points!

Cole The Redneck Understudy pick the old standby, Mr. Seven-Time, Jimmie Johnson, as was not let down.  Even though Johnson started deep in the field when the green flag flew, he sliced and diced his way through the field to be a factor when the checkered flag fell, producing 38 points.

Rounding out the top five scorers for the week is Linda The Cookie Mom.  The Cookie Mom was another player who was way out there on the limb picking Jamie McMurray, and it paid off handsomely for her with 33 points.

Only five players held serve and remained in their previous positions after the Phoenix race ended.  That means the 16 players switched places when the Sun set in Phoenix.

Leading the charge of movement this week is Zee, aka Sissy who plummeted eleven (11) spots, resting in 16th place.

Both Jerry The Buschwacker and Carole, aka Rudy saw their star fall from grace tumbling seven (7) spots sitting now in 14th and 18th, respectively.

Both David The Mudslinging Throttle Jockey and Snoopy Dawn moved up six (6) places to sit in 7th and 9th, respectively.

There is a trio of players that moved five (5) places this week.  Cole The Redneck Understudy climbed up on the totem pole to sit in 13th place.  Meanwhile, both Jerry The Buschwacker and Skid-Marc slid down five spots resting in 12th and 19 places, respectively.

Winning “The Crappiest Pick of The Week” this week will most assuredly be your fate if you only scored a single digit and this week Zee, aka Sissy is the only player that fits this description!

By only scoring 12 points this week, Doug The Gandy Candy Man, assured himself at least one more week in “The Outhouse”!

Next week NASCAR continues moving west to Fontana,CA and the Auto Club Speedway.