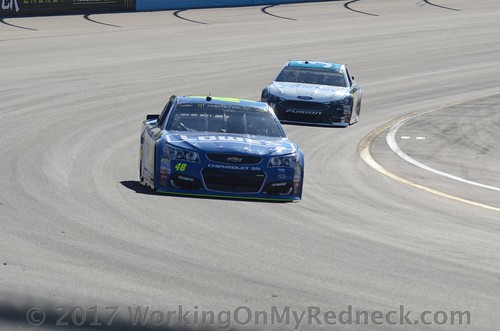 The King of the mile and a half tracks just logged another victory on that length of track.  This was Jimmie Johnson’s 7th win at the Texas Motor Speedway and his 81st career NASCAR victory.  Mr. Seven-Time has just punched his ticket to the NASCAR playoffs!

Johnson surged to victory after starting at the rear of the field for the O’Reilly Auto Parts 500, christening Texas Motor Speedway’s new track surface with a win on the newly repaved and reconfigured race track.

Johnson led just 18 of the race’s 334 laps in the Hendrick Motorsports No. 48 Chevrolet, finishing 0.340 seconds ahead of runner-up Kyle Larson.  He started as “Tail Gun Charlie” at the rear of the field after a spin in Coors Light Pole Qualifying, which required the team to change tires before the green flag.

This week we have a trio of recipients, Jeremy The Coach, Edie The Las Vegas Super Star, and a back-to-back recipient, Karen The Extremely Opinionated Southern Belle!  All three players were buckled in tight and riding shotgun with “The King of The Half Mile Tracks”, ol J.J.!  Having Johnson this week was good for 49 big points for this motley crew.

Having a really big bounce back from last week’s disasterous 1 point race, . scored big this week!  Sissy probably feels like she hit the Lottery with “Young Money”, Kyle Larson rewarding her with 47 points at Texas.

Three players, Lonna The Quilt Angel, Linda The Cookie Mom and David The Mudslinging Throttle Jockey were feeling good after “Freaky Fast” Kevin Harvick powered his way to the lead pack very late in the race and delivered 44 points to his supporters.

Meanwhile ol Skid-Marc had another very good race.  Skidz was hanging out with “Blazingly Bad” Brad Keselowski.  “Bad Brad” tossed him a bone to the tune of 40 points at Texas.

Rounding out the top five scorers this week is Snoopy Dawn.  Snoopy was really hoping that Martin Truex, Jr. could hold off the field when he took the lead around the 2/3 point of the race.  That wasn’t in the cards for Truex, but he still handed over 39 points to The Sneaky One!

The biggest movers of the week are a pair of divergently dissimilar players, Bobby Blue Crush and Kathy The Church Forecloser.  Both players plummeted in the standings like burned out meteor, dropping seven (7) places to land in 8th and 16th, respectively.

Conversely, both Jeremy The Coach and David The Mudslinging Throttle Jockey soared up five (5) positions to now reside in a tie for 8th and 14th, respectively.

Again another duo that  ping ponged around the scoring pylon this week.  Karen the Highly Opinionated Southern Belle, as was reported above, is a back-to-back Go Fast Fraternal member, and therefore recorded another great race weekend that propelled her up in the standings four (4) spots to 7th place. Even though Jim, aka Chiefy, rebounded with a significantly higher score this week, he continued his downward spiral at full throttle!  This week Chiefy fell and additional four (4) places landing in 10th spot.

Rounding out the top five groups of movers are Carlton The Doorman and Carol, aka Rudy.  The Doorman krept up the leaderboard two places and Rudy stumbled down two places.

The Crappiest Pick of The Week goes to Bobby Blue Crush.  Blue Crush was only able to manipulate one stinking point from his selection of Kasey Kahne!

We have a new Prince of The Poophouse this week.  After a short two week vacation Doug The Gandy Candy Man sent an eviction notice to Zee, aka Sissy and ousted her out of The Outhouse this week!

Next week the Cup teams are off and will be at home with their families celebrating Easter.

TIL NEXT TIME, PULL YOUR GLOVE UP, FLIP YOUR VISOR DOWN, AND LET’S GO RACIN”!