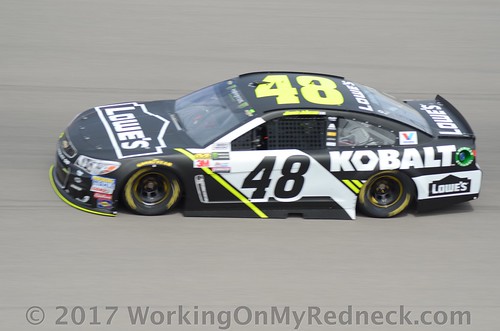 Jimmie Johnson surged to victory in the rain-delayed Food City 500 on Monday at Bristol Motor Speedway.

Johnson powered the Hendrick Motorsports No. 48 Chevrolet to his second straight Monster Energy NASCAR Cup Series victory of the season, leading 81 of the 500 laps. His 82nd win of his career was his second on the .533-mile Tennessee track.

Pole-starter Kyle Larson, and a very dominate car, seemed poised for a top-five finish after leading the opening 202 laps including a Stage 1 win, but a pit-road speeding penalty on Lap 423 knocked him back to 17th in the running order. He rallied to a sixth-place finish and maintained his lead in the series standings.

Unfortunately not a single fantasy league player selected Jimmie Johnson this week.  So this award goes vacant this week.

We have a new sheriff in The Redneck Fantasy League town!  It is none other than Leon Your Most Humble Sheriff, who sits atop of the leaderboard this week.  I just thought that I would blow my own horn really big and very loudly this week, since I rarely have been to the top of the mountain!

This week the highest scoring players, Bernie The Bay Area Bandit, Jim, aka Chiefy, Skid-Marc, as well as Leon Your Most Humble Sheriff were all stuffed into the cockpit of Kyle Larson’s hot rod today!  All four players were tickled to death to gather up a nifty 45 points for all the hard work that “Young Money” did at the rain delayed Food City 500 at Bristol.

Killimanjaro Bobby racked up a cool 41 points from “Freaky Fast” Kevin Harvick.  Once again Harvick emerged in the very latter stages of the race, quite literally from nowhere, to slip into third place when the checkered flag flew!

Rounding out the top five scorers this week is Linda The Cookie Mom who boldly selected Ryan Newman and that gave her 23 points added on to her segment numbers.

This week there was, once again, wide spread movement within the fantasy league.  In fact, the only players who remained in their previous spots were Jerry The Buschwacker and Doug The Gandy Candy Man.

The biggest mover this week is Bernie The Bay Area Bandit rocketing up the scoring pylon seven (7) places to land in 12th place.

Similarly, Carlton The Doorman slid down in the standings four (4) places to rest in 6th place this week.

This next gagle consists of a huge group of players.  There are, count them, nine players who have moved three (3) spots.  Cole The Redneck Understudy, Skid-Marc, Jim, aka Chiefy, Bobby Blue Crush, and Leon Your Most Humble Sheriff all stepped up three (3) places now residing in 15th, 8th, 7th, 5th and 1st, respectively.  However, Carole, aka Rudy, Kathy The Church Forecloser and David the Mudslinging Throttle Jockey all plummeted three (3) places to sit now in a tie for 18th (Rudy and The Forecloser) and 17th, respectively.

Bringing up the tail end of the biggest movers is a trio of ladies, Linda The Cookie Mom, Karen The Highly Opinionated Southern Belle and Snoopy Dawn.  All three ladies slid down the totem pole two (2) spots this week.

As I have often repeated, when you only score a single digit for the week, the chances are that you will be awarded “The Crappiest Pick of The Week” award. Well, Snoopy Dawn did just that!  She scored just one (1) point and single-handedly won this award this week!

Once again this week we have our favorite vendor, Doug The Gandy Candy Man, in firm control of “The Outhouse”!  I would like to report that The Gandy Candy Man has a 20 point pad on his nearest competitor, so it looks like he may be there for sometime!

Next week NASCAR rolls into the final short track race int this part of the schedule.  The next track is in Virginia and built on the grounds of the Henrico County Fairgrounds, Richmond International Raceway.

So far at the short tracks the drivers and the crewmembers have been able to keep their emotions in check.  Will that continue to happen, or will we see them deciding that they “won’t back down, won’t be turned around?