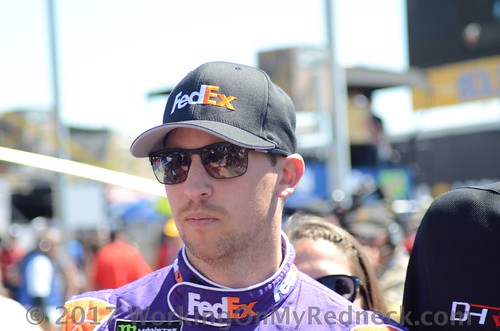 “Well it’s a long way to Richmond rolling north on 95”!

But that is exactly what the NASCAR Circus will be doing this week in preparation for the Toyota Owner’s 400 at Richmond International Raceway.  This is the last race of the spring short track swing.  This 3/4 mile short track races like a superspeedway, in that it is less than a mile in length bui it is high speed in nature!

This week we have 1/4 of The Redneck Fantasy League, four players in total, riding in the cockpit with Denny Hamlin, crowded as that may be!  Those four players include Lonna The Quilt Angel, Jim, aka Chiefy, Bobby Blue Crush, as well as Leon your Most Humble Sheriff.

There are three drivers that have a rooting section of three players this week.  “Young Money”, Kyle Larson, has the confidence of Carlton The Doorman, his better half Snoopy Dawn, as well as Linda The Cookie Mom.

Jerry The Buschwacker, Bernie The Bay Area Bandit and Cole The Redneck Understudy are banking that “Sliced Bread”, aka Joey Logano, can get it done for them at Richmond.

Lastly, there are two drivers with two players in their cheering section at Richmond.  Kathy The Church Forecloser and Doug The Gandy Candy Man are hanging their hat on Austin Dillon this week.

Meanwhile, “Blazingly Bad” Brad Keselowski has Zee, aka Sissy and A&M Aggie Sue in his hip pocket for The Toyota Owner’s 400.

This leaves 5 players that are in bidnez for themselves this week.

Good luck to all at Richmond!

TIL NEXT TIME, PULL YOUR GLOVES UP, FLIP YOUR VISOR DWON, AND LET’ GO RACIN’!