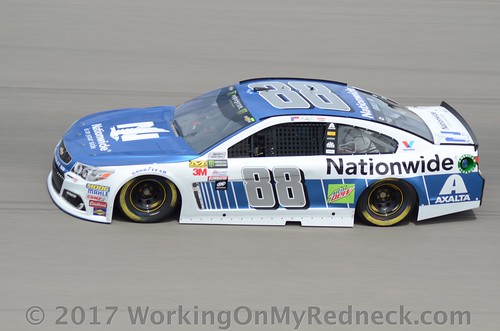 With this being the final year, the swan song, for the 14 time winner of the NASCAR most popular driver award, Dale Earnhardt, Jr. who cool would it be for him to lead the field to the checkered flag?  Well, a majority of The Redneck Fantasy League is either very smart or feeling quite nostalgic this week!

Nearly one third of the fantasy league, six players, are applying for a temporary visa, a green card, and application into Junior Nation this week.  Those players who are wanting to jump onboard of the Junior Nation train bound for Talladega this week include Lonna The Quilt Angel, Doug The Gandy Candy Man, A&M Aggie Sue, Jim, aka Chiefy, Bernie The Bay Area Bandit, as well as Jeremy The Coach.

There are three drivers with a rooting section of three players each this week.

The first of those three drivers is the young gun William Clyde Elliott, Jr., aka Chase.  Those players who are 100% behind Chase include Skid-Marc, Kathy The Church Forecloser and Dan The Numbers Cruncher.

Meanwhile, Cole The Redneck Understudy, Edie The Las Vegas Super Star and Karen The Highly Opinionated Southern Belle are hoping that “The Delivernator”, Denny Hamlin, can deliver a win to them at Talladega.

Lastly, Linda The Cookie Mom, Snoopy Dawn and Leon Your Most Humble Sheriff have put all their chips on black.  That black would be the black No.41 Ford of Kurt Busch!

As usual there are a segment of players that have gone rogue this week, six to be exact.  Those six players are our independent thinkers that are most definitely in bidnez for themselves.

Good luck to all at Talladega this week.

“Here’s to turning up, slowing down, and to cars going real fast” at Talladega!

TIL NEXT TIME, PULL YOUR GLOVES UP, FLIP YOUR VISOR DWON, AND LET’S GO RACIN’!