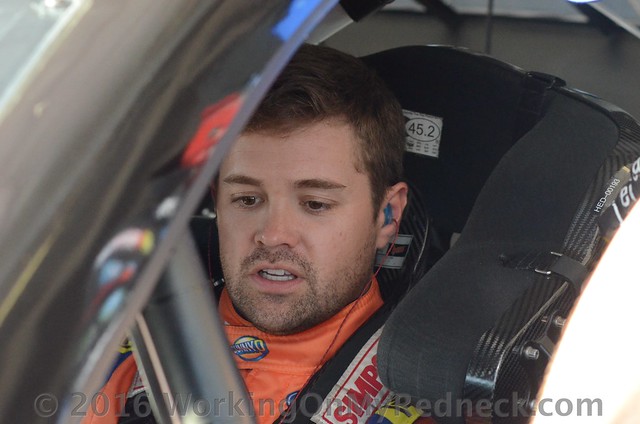 Ricky Stenhouse Jr. started from the pole, avoided the “Big One” and captured his first Monster Energy Series NASCAR Cup race Sunday in the GEICO 500 at Talladega Superspeedway.The 29-year-old Stenhouse won for the first time in 158 career races at the premier level by bolting his No. 17 Roush Fenway Racing Ford past Kyle Busch on a NASCAR overtime restart.

In the race’s “Big One”, AJ Allmendinger turned Chase Elliott’s No. 24 Chevrolet from behind as the two were battling for second place. Elliott’s car turned on its side and Allmendinger’s No. 47 Chevrolet flipped upside down.  The red flag came out allowing track officials to turn The Dinger’s car back over and on its wheels and then extricate him. He walked from the car and was treated and released from the infield care center.

As we all know Talladega is like rolling dice at a casino.  Forest Gump might put it in another way equivacating Talladega to a box of chocolates!  Nevertheless, I think that you get the picture.  Having said all that, no player selected Ricky Stenhouse, Jr. to win Talladega this week and therefore this award goes vacant.

There were two players who banked the most points this week, Karen The Highly Opinionated Southern Belle and Edie The Las Vegas Super Star.  Both ladies were riding shotgun with “The Delivernator”, Denny Hamlin.at Talladega and racked up 36 nifty points.

There is a quintet of players that also did very well this week.  These five players scored 35 points via three different drivers.  David The Mudslinging Throttle Jockey was rooting for one of his midget and sprint car veterans, Kasey Kahne.  Carlton The Doorman received his points from “Mr. Seven-Time”, Jimmie Johnson.  Addtionally, Linda The Cookie Mom, Snoopy Dawn and Leon Your Most Humble Sheriff were hanging it out for Busch the elder, Kurt, formally known as “The Outlaw”.

Carole, aka Rudy, was all in with Clint Bowyer this week and was rewarded with 23 points.

Jerry The Buschwacker scored decently this week gathering up 16 points delivered to him by Martin Truex, Jr.

Lastly there is a gaggle of players, six in total, that round out the top scorers this week.  This group includes Lonna The Quilt Angel, Doug The Gandy Candy Man, A&M Aggie Sue, Jim, aka Chiefy, Bernie The Bay Area Bandit and Jeremy The Coach all had an excellent choice this week, “The Piep Piper of Plate Racing”, Dale Earnhardt, Jr.  Each of these players garnered just 15 points from Junior.

Once again the leaderboard shook like an earthquake this week.  Although there wasn’t huge individual movement, there was wide scale shifing of positions throughout the totem pole.  There were only five players who remained in their previous positions after the checkered flag flew at Talladega.

The largest mover this week is Snoopy Dawn.  Snoopy leap-frogged up four (4) positions to now reside in 12th place.

A group of seven players, Karen The Highly Opinionated Southern Belle, Edie The Las Vegas Super Star, Bobby Blue Crush, Jim, aka Chiefy, Cole The Redneck Understudy, David The Mudslinging Throttle Jockey and Jerry The Buschwacker all moved three (3) places.  The Highly Opinionated One, The Las Vegas Super Star, The Redneck Understudy, as well as The Mudslinger all climbed up the leaderboard three (3) spots to sit now in 5th, 6th, 11th and 15th, respectively.  Conversely Bobby Blue Crush, Chiefy and The Buschwacker all fell three (3) spots resting in 7th, 8th and 16th, respectively.

This week “The Crappiest Pick of The Week” goes to Zee, aka Sissy.  Sissy could only muster up one (1) microscopic point this week.  A single digit score will almost always guarantee you this award.

Once again The Gandy Candy Man is comfortably hanging out in his usual spot, “The Outhouse”!  The Candy Man has widened his margin to 22 points this week.  With just two race left in this segment, it may be safe to put all your money on The Candy Man securing this award outright for the segment!

The GEICO 500 was really a cool calm race until lap 168 of 188 scheduled laps. It seems that Chase Elliott could have been singing the Steeler’s Wheel song as he was turned into the fence, got airborne and landed on Joey Logano’s hood.

This week we have our first schedule Saturday night race when NASCAR moves to the Kansas Speedway, which is just southwest of the Kansas City airport about 5 or 6 miles.