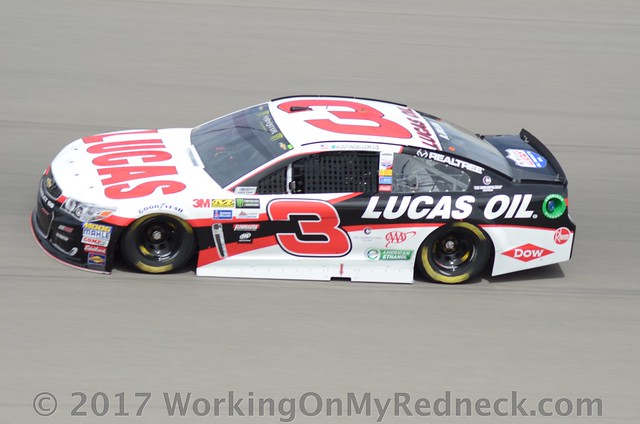 Armed with a new crew chief and a gas tank that held just enough fuel to get him to the end of 600 miles with less than a second to spare, Austin Dillon won the first Monster Energy NASCAR Cup Series of his career and put the historic No. 3 Chevrolet back in Victory Lane for the first time since 2000.

Working for the first time in the Monster Energy NASCAR Cup Series with crew chief Justin Alexander, Dillon was one of eight drivers who stayed on the track when the strongest cars in the Sunday night’s Coca-Cola 600 at Charlotte Motor Speedway—the Toyotas of eventual runner-up Kyle Busch and third-place Martin Truex Jr.—came to pit road on Lap 368 of 400.

Saving fuel for the entire run, Dillon trailed Jimmie Johnson, who also stayed out, until the seven-time champion ran out of gas with less than three laps left. With Busch and Truex in hot pursuit, Dillon had just enough fuel to get to the finish line.

The No. 3 Chevrolet owned by Dillon’s grandfather, Richard Childress, returned to the winner’s circle for the first time since the late Dale Earnhardt won his last race on Oct. 15, 2000 at Talladega. After Earnhardt’s death in the 2001 Daytona 500, Childress retired the number in NASCAR’s premier series until Dillon ran his first full season of Cup racing in 2014.

For the final week of segment there was no player who selected Austin Dillon to win at Charlotte, therefore this award goes vacant.

We have qauartet of players, Bernie The Bay Ara Bandit, Doug The Ageless Sprint Car Racer, Carole, aka Rudy, as welll as Leon Your Most Humble Sheriff who racked up 60 big points from Martin Truex, Jr’s third place finish.

Snoopy Dawn must be doing her “happy dance” after logging 55 points from Matt Kenesth’s steady performance in the Coca Cola 600.

Likewise, Jeremy The Coach faired will at Charlotte.  The Coach added 43 points to his segment total  as a result of Kenny Hamlin’s 6th place finish.

Meanwhile, Kathy The Church Forecloser kept herself out of the clutches of “The Outhouse” by gathering up 41 points from Kevin Harvick’s 8th place finish.

Rounding out the top five scorers for the final race of the first segment is ol Skid-Marc.  Skidz was rolling the bones with Erik Jones and came up a winner, adding 39 points to his totals.

To end the first segment there were sixteen (16) players who moved around on the leaderboard.  The only plyaers who remained in their previous places were, Your Most Humble Sheriff, The Cookie Mom, Rudy, The Church Forecloser and The Ageless Sprint Car Driver!

Leading the movers this week are Lonna Soopy Dawn and A&M Aggie Sue.  Snoopy rocketed up on the totem pole five (5) spots as the segment colses to rest in 8th place.  A&M Aggie Sue was not nearly as fortunate, crashing down five (5) places to sit in 10th pace.

Next up is a quartet, Edie The Las Vegas Super Star, Bernie The Bay Area Bandit, Cole The Redneck Understudy, as well as Dan The Numbers Crucncher all moved four positions after Charlotte. The Bay Area Bandit faired the best of that group, moving up on the leaderboard four (4) places to end up in 14th.  Conversely, The Las Vegas Super Star,The RedneckUnderstudy and The Numbers Dude all plummeted four (4) places to finish the segment in 11th, 16th and 17th, respectively.

Additionally, there was another quartet that exchanged places with moderate, results.  That foursome includes Karen The Highly Opinionated Southern Belle, Skid-Marc, Jeremy The Coach and David The Mudslinging Throttle Jockey.  Both Skidz and The Coach had positive movement, stepping up two (2) places to finish out in 7th and 12th, respectively.  However, The Highly Opinionated One, as well as The Throttle Jockey dropped two (2) positions to finish the segment in 6th and 13th, respectively.

There was a hard fought tie for The Crappiest Pick of the week!  Both The Doorman and The Highly Opinionated One were rooting for Chase Elliot.  Unfortuately he, Elliott, was caught up in a very early crash when “Blazingly Bad” Brad shortened up Elliott’s wheel base by several feet when Kes rear ened him at full speed, renedering only 1 point for each!

Next week the traveling circus rolls into the Monster Mile at Dover.

Today is Memorial Day and to honor all of our fallen heroes, we should NEVER let their sacrifices be forgotten!  Tonight, do as I do evey night, say a prayer for peace!