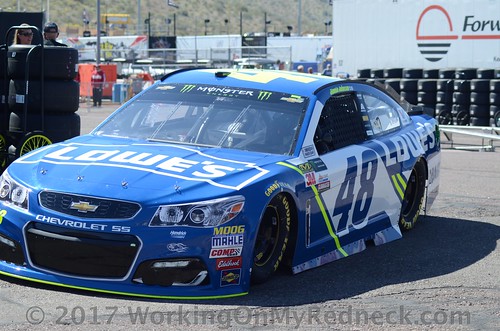 Well the NASCAR circus rolled into the Del-Mar-VA peninsula this last weekend and in particular into Dover, Delaware for the AAA 400 Drive For Autism at the Dover International Speedway, aka The Monster Mile!  You are familiar with ists nickname right, “The Monster Mile”!  Well, it lived up to  that moniker and ate up a few race teams during the race!

The second segment got off to a great start with three players joining the club this week, Lonna The Quilt Angel, Snoopy Dawn and Carlton The Doorman led the players in scoring this week and pocketed a victory by ol Mr. Seven-Time, Jimmie Johnson!  This trio put up 55 points on the scoreboard to begin the middle segment of 2017.

Following the above mentioned group of players on the scoring pylon includes Dan The Numbers Cruncher, Doug The Ageless Sprint Car Driver, Jim, aka Chiefy and Leon Your Most Gracious and Extremely Humble Sheriff.  This motley crew was riding the Martin Truex, Jr. bandwagon and logged a nifty 54 points from all of his hard racing.

Not to be outdone this week was a mixed bag of players, Karen The Highly Opinionated Southern Belle, Linda The Cookie Mom and Cole The Redneck Understudy.  Each one of these players grabbed a cool 50 points via “Young Money”, Kyle Larson’s racing efforts!

Both Carole, aka Rudy as well as Bobby Blue Crush snagged 41 points for Kevin Harvick’s hard charging at Dover.

Rounding out the top scorers this week is A&M Aggie Sue.  Aggie Sue was riding shotgun with Chase Elliott at Dover and logged 36 points to her first race of the segment.

We had two hard luck players this week, Bernie The Bay Area Bandit and Jeremy The Coach, that were only able to gather up a single digit score on the scoring pylon, which we all know will put you in contention for “The Crappiest Pick of The Week” award!  But the hands down winner this week is The Coach, who was only able to slap up one (1) point on his weekly effort! Because of that microscopic tally The Coach also is givrn to the keys to the Executive Washroom, aka “The Outhouse” to start off this segment!

Next week the NASCAR haulers move on to “The Tricky Triangle” located between Allentown and Wilkes-Barre, PA.

We are now entering “the dog days of the summer, as well as the NASCAR schedule!  All I can say is “Baby Hold On”!

TIL NEXT TIME, PULL YOUR GLOVES UP, FLIP YOUR VISOR DOWN, AND LET’S GO RACING!