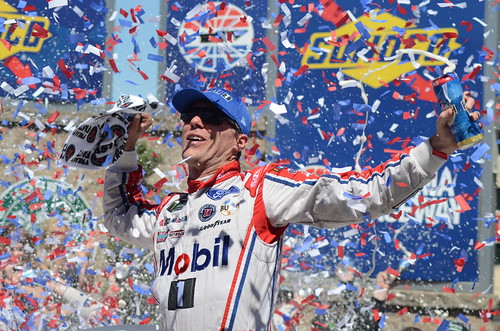 Harvick led 24 of the 110 laps, with his Stewart-Haas Racing No. 4 Ford a solid 8.036 seconds in front at the finish. His first victory at the 1.99-mile road course was the 36th of his career in NASCAR’s premier series.

This week Jerry The Buschwacker was the only player to ride with Kevin Harvick at Sonoma.  The Buschwacker logged 40 points this weekend in the heart of the wine country and and is inducted into the fraternity!

As was mentioned above, The Buschwacker picked the winner and logged the third highest score, 40 points.

Linda The Cookie Mom and Doug The Ageless Sprint Car Racer each added 30 points to their totals this week.

Once again there was wide scale movement from within the fantasy league.  The biggest movers this week are Carlton The Doorman, Jerry The Buschwacker and Karen The Highly Opinionated Southern Belle.  The Doorman and The Buschwacker rocketed up five places this week landing in 5th and 6th, respectively.  But The Highly Opinionated One plummeted five places to sit in 10th place this week.

Round out this list are Dan The Numbers Dude and Carole, aka Rudy slipped three spots after Sonoma, and reside in  9th and 18, respectively.

Karen The Highly Opinionated Southern Belle is awarded “The Crappiest Pick of The Week” for her eleven (11) points scored at Sonoma!

For the fourth straight week Jeremy The Coach is in solid control of “The Outhouse”!  However his is closing the gap on his nearest competitor, Bernie The Bay Area Bandit, narrowing the gap to just  this week!

Witht the advent of stage racing, the road races have become much more of a “thriller’ these days!

Next week it is back to Daytona for NASCAR.