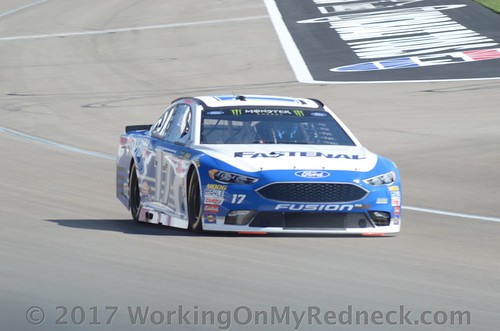 The major story of Saturday night’s Coke Zero 400 Powered by Coca-Cola – Dale Earnhardt Jr.’s final run at his beloved Daytona International Speedway in the No. 88 Hendrick Motorsports Chevrolet – turned out to be a footnote to Ricky Stenhouse Jr.’s masterful victory in a war of attrition that produced a race-record 14 cautions.

The driver of the No. 17 Roush Fenway Racing Ford, who got his first Monster Energy NASCAR Cup Series victory in his 158th career start two months ago at Talladega, established himself as a restrictor-plate wizard with his second straight superspeedway win, this one after three laps of overtime.

Stenhouse’s Roush Fenway Racing No. 17 Ford led 17 of 163 laps in the Coke Zero 400 Powered by Coca-Cola. He bypassed David Ragan with a lap and a half remaining and held on to the checkered flag.

His second victory of the season was his first at the 2.5-mile track and second of his Monster Energy NASCAR Cup Series career. His other win in NASCAR’s premier series came in May at Talladega Superspeedway.

The Movers And Shakers

Not a single player had Stenhouse as their Daytona selection this week and therefore this coveted award goes back to the “water closet” til this weekend at Kentucky!

The restrictor plate tracks, Daytona and Talladega, always throw a huge monkey wrench into the standings.  Those two tracks either make our players a hero or a zero! Saturday night there was a very mixed bag of results.  Most of the players did not have a race that would warrant writing home to Mom about!  It was like “riders on the storm”!

Rounding out the top five scorers this week is none other than Jerry The Buschwacker, who scraped together 17 points from his man, Kyle Busch, who finished 20th at Daytona.

As always, the plate tracks play havoc with our leaderboard.  Because of the turmoil that usually goes hand and hand with restrictor plate racing at Talledega and Daytona, the standings following these races always appears to be the results of putting all of the players into a blender and hitting the on switch, or like all the drivers are swept up in a tornado, tossed about, and dumped out on the race track!

Our other resident racer, David The Mudslinging Throttle Jockey, was the second largest mover of the race.  However, The Mudslinger plummeted down four (4) places landing just 27 points from the front door of “The Outhouse” in 20th position.

Both Kathy The Church Forecloser and Carole, aka Rudy climbed up two (2) places to sit comfortably in 13th and 16th, respectively this week.

Rounding out the top five movers this this week are five players, Lonna The Quilt Angel, Jim, aka Chiefy, Bobby Blue Crush, Linda The Cookie Mom, Zee, aka Sissy, as well as A&M Aggie Sue, who just slipped up or down one spot this week each.  Bobby Blue Crush is the only player of this group who had a positive movement.  Blue Crush sits neatly in 7th place this week. The Quilt Angel, Chiefy, The Cookie Mom, Sissy and Aggie Sue all slipped one place resting in 2nd, 3rd, 14th, 15th and 18th, respectively.

I wished that I had some Earth shaking news about “The Outhouse Award” this week, but I don’t!  It appears that Jeremy The Coach loves the place and has found true solace in “The Outhouse”, because he has been firmly entranced at that location for all five races this segment!

The stop for NASCAR is Kentucky Speedway for another Saturday nigh race this week.

Like always, the restrictor plate racing with all its twists, turns, and sheet metal carnage is like a bunch of “riders on the storm”!

TIL NEXT TIME, PULL YOUR GLOVES UP, FLIP YOR VISOR DOWN, AND LET’S GO RACING’!