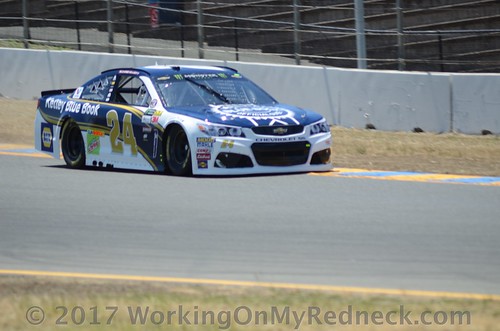 Now that the Coke Zero 400 has been raced, the 4th of July fireworks have been fired off, it is time to roll through the Kentucky Speedway this Friday night. By the time most of you might click on this post I will be setting up the ol RV just north of Coos Bay, Oregon in a place called Osprey Point RV at Lakeside, OR for a few weeks.

This week we have a full house of selections for Kentucky,  As the photos suggests Chase Elliott is the favorite for the fantasy league.  There are four players, Carole, aka Rudy, Skid-Marc, Zee, aka Sissy and Dan the Numbers Cruncher that are putting all their fortunes on the line hoping that Elliott scores his first Cup victory at Kentucky.

Not to be outdone is the trio of Kathy The Church Forecloser, Edie The Las Vegas Super Star and Bobby Blue Crush who are all in with Martin Truex, Jr. at Kentucky.

Another trio of wishful players includes Karen The Highly Opinionated Southern Belle, A&M Aggie Sue, as well as Leon Your Most Humble Sheriff who are betting the farm that Kurt Busch, formally known as “The Outlaw”, can get his second victory of the season.

There are five drivers this week that have a cheering section of two players each.

Snoopy Dawn and Bernie The Bay Area Bandit are riding shotgun with Matt Kenseth, who is looking for his first win of the 2017 season.

Jim, aka Chiefy and Linda The Cookie Mom are joining forces to support “The Delivernator”, Denny Hamlin, who is also winless in 2017.

The unlikely duo of Carlton The Doorman and Doug The Ageless Sprint Car Driver will be hoping that “Freaky Fast” Kevin Harvick is on a hot streak and can log another victory this Saturday night.

Meanwhile, Cole The Redneck Understudy and Jeremy The Coach are  thinking that Joey Logano can win this race without the penalties that made his other victory “encumbered”.

Lastly, Jerry The Buschwacker and David The MudslingingThrottle Jockey are teaming up together to root on “Blazingly Bad” Brad Keselowski on to another win at Kentucky.

After reviewing the choices for Kentucky we have a very unique situation. This week there is only one player that is in bidnez for herself, Lonna The Quilt Angel!

Now we all can just hope that this weekend does not replicate last week in Daytona with some “Kentucky Rain”!

“Seven lonely nights and a dozen towns ago”.