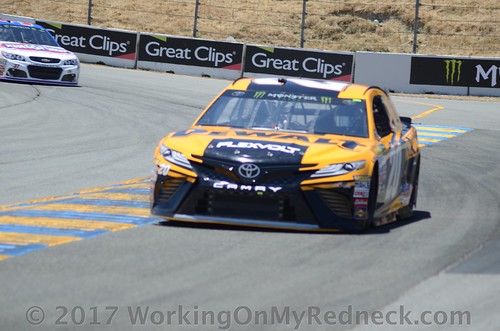 As we race into the second half of the second segment of 2017, NASCAR rolls into the Northeast.  All the haulers are on their way to Louden ,New Hampshire- which is approximately 84 miles northwest of downtown Boston, MA.  This is the first of two races at this facility for 2017.  However, beginning in 2018 Louden will loose the second race during, which occurs during “The Playoffs” in late September, to Las Vegas.

This week nearly one quarter of the fantasy league, five players in total, are onboard with Matt Kenseth at Louden.  Those five players include A&M Aggie Sue, Cole The Redneck Understudy, Linda The Cookie Mom, Kathy The Church Forecloser, as well as Leon The Retired Airline Captain, Part-Time Cardiologist and Strawberry Picker, and of course Your Most Humble Sheriff.  All five players are hoping that the senior driver at Joe Gibbs Racing, Kenseth, can finally claim his first victory for the 2017 season.

There are five drivers, this week, that have a cheering section of two players each for “The Magic Mile”, also known as the New Hampshire Motor Speedway.

Lonna The Quilt Angel and Jeremy The Coach appear to be of the mindset that Louden is the place that Clint Bowyer can dig out from his several year winning slump.  Now that he is driving the Stewart-Haas Racing No.14 Ford he has his best chance of adding wins to his resume.

Kurt Busch has attracted Carlton The Doorman and David The Mudslinging Throttle Jockey to his rooting section this week.

Rounding out our choices for Louden this week is the duo of Snoopy Dawn and Jim, aka Chiefy, who are loudly and proudly putting all their marbles in the sack of “Freaky Fast” Kevin Harvick.

This week we have a group of six players who have not joined forces with any of the other players, and therefore are in bidnez for themselves!

As the haulers drive up I-95 along the Eastern Seaboard from Charlotte to Louden, NH, and pass near or through the greater Boston area, I wonder if any of those drivers will be hearing this Dave Loggins tune in their head?