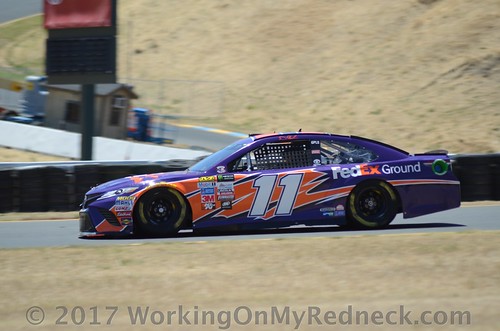 “The Chowda” has been served!

Hamlin, who had a “crustation fixation”, led 54 of 301 laps in the No. 11 Toyota, taking the checkered flag of the Overton’s 301 with a .509-second margin of victory over a fast-closing Kyle Larson, who was “selfish for shellfish”. Hamlin’s third win at the 1.058-mile track was the 30th of his career in NASCAR’s premier series, marking the first triumph this year for Joe Gibbs Racing.

Nobody selected Denny Hamlin, who was a “wicked pissa” today, to win at Louden.  Therefore, this award will go vacant this week.

The highest scorer this week is Carole, aka Rudy, who added 49 points to her totals for Martin Truex, Jr’s third place finish.

There were six players, A&M Aggie Sue, Doug The Gandy Candy Man, Cole The Redneck Understudy, Linda The Cookie Mom, Kathy The Church Forecloser, as well as Leon Your Most Humble Sheriff, who were banking on Matt Kenseth lifting up the “Lobsta”!.  All six players added 46 points to their 2nd segment totals

Snoopy Dawn and Jim, aka Chiefy each were rooting for “Freaky Fast” Kevin Harvick.  For their foresight each player added 40 points to their totals.

Meanwhile, Carlton The Doorman and David the Mudslinging Throttle Jockey each racked up 36 points from Kurt Busch’s 8th place finish at Louden.

Rounding out the top five scorers this week is Zee, aka Sissy.   Sissy was riding shotgun with “Mr. Seven Time”, Jimmie Johnson ,and received 33 points for JJ’s 10th place finish.

Only three players, Doug The Ageless Sprint Car Driver, Carlton The Doorman, Zee, aka Sissy, remained in their previous position after the checkered flag flew at Louden.  Using basic math that means that 18 players have changed places this week.

The largest movers this week are Dan the Numbers Cruncher and Carole, aka Rudy. The Numbers Dude did not fair so good this week tumbling three (3) places to sit in 11th this week.  Conversely, Rudy moved up three places to rest in 13th position.

Six players, Jim, aka Chiefy, Bobby Blue Crush, Leon Your Most Humble Sheriff, Jerry The Buschwacker, Karen The Highly Opinionated Southern Belle, as well as Bernie The Bay Area Bandit all shifted two spots on the leaderboard.  Both Chiefy and Your Most Humble Sheriff stepped up two (2) places siitting now in 2nd and 7th, respectively.  Whereas Blue Crush, The Buschwacker, The Highly Opinionated One, as well as the Bay Area Bandit all slithered down two (2) places resting in 5th, 14th, 16th, and 19th, respectively.

You know that most all of the players did very well when “The Crappiest Pick of The Week” goes to someone who scored 16 points.  That player with just 16 points is Bernie The Bay Area Bandit!

We have a new “Prince of The Poophouse” this week.  Jeremy The Coach just could not stand smelling “clean fresh air” last week.  Therefore, he issued an eviction notice to The Mudslinging Throttle Jockey and resumed control of “The Outhouse”!

Now that the checkered flag has waved in New Hampshire, the NASCAR haulers have spent “the weekend in New England” and now will be heading back to their shops, then onto the historic Indianapolis Motor Speedway.