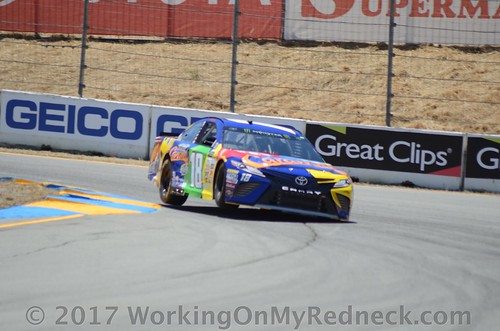 Kyle Busch took advantage of Kevin Harvick getting loose, fed him a fender to move him out of the way, passed him on Lap 144 of 160 and drove away with the victory in Sunday’s Overton’s 400 at Pocono Raceway.

Busch ended a winless streak that stretched back to Indianapolis in 2016, a stretch of 36 races, and captured his first career victory at the Tricky Triangle. Busch now has 39 wins in the Monster Energy NASCAR Cup Series and has won a points race at every track in the series except for Charlotte Motor Speedway.

Busch, in his No. 18 Joe Gibbs Racing Toyota, overcame a competitive field and rebounded from last week when he and Martin Truex Jr. wrecked on a restart while both cars were on the front row with less than 50 laps remaining.

Both Jim, aka Chiefy and Cole the Redneck Understudy were riding shotgun with “The Shrub”, Kyle Busch at Pocono.  With the victory at Pocono KyBu gave this pair a nifty 50 points to their 2nd segment totals.

Following Chiefy and The Redneck Understudy with 48 points added to their totals are Jeremy The Coach and Bernie The Bay Area Bandit.  Both players were betting the farm on “Blazingly Bad” Brad Keselowski this week.

After having three semi-terrible weeks mid way through this segment, Karen The Highly Opinionated Southern Belle has rebounded with a respectable score of 43 points from Kevin Harvick’s 2nd  place finish.

Rounding out the top five scorers this week is a trio that consists of Bobby Blue Crush, A&M Aggie Sue and David The Mudslinging Throttle Jockey. Each player racked up 37 points from Denny Hamlin’s 4th place finish.

This week there were only three players that remained in their previous places, our leader Lonna The Quilt Angel, A&M Aggie Sue and David The Mudslinging Throttle Jockey.

The biggest mover this week was Carlton The Doorman, who could only muster up 6 points to add to his 2nd segment tally card and fell five (5) places to now sit in 15th place.

There are four players, Cole The Redneck Understudy, Carole, aka Rudy, Bernie The Bay Area Bandit, as well as Jerry The Buschwacker, who moved four (4) places after the checkered flag flew at Pocono.  The Redneck Understudy, Rudy and The Bay Area Bandit climbed up four (4) spots to sit now in 7th, 10th, and 13th, respectively.  Whereas, The Buschwacker slid four spots to sit now in 17th.

Meanwhile the trio of Jim, aka Chiefy, Doug The Gandy Candy Man and Linda The Cookie Mom moved three (3) spots.  Chiefy was the only one to move up on the leaderboard.  He sits in the money at 3rd place.  But  Doug The Ageless Sprint Car Driver and The Cookie Mom stumbled three spots to sit in 5th and 12th, respectively.

Next up is a quartet consisting of Leon Your Most Humble Sheriff, Karen The Highly Opinionated Southern Bell, Jeremy The Coach, as well as ol Skid-Marc, who migrated two (2) places in the standings.  The Highly Opinionated One and The Coach both stepped up two (2) spots to sit now in 13th and 19th places, respectively.  But  Your Most Humble Sheriff, and Skid-Marc slipped down two positions to sit now in 6th and 21st, respectively.

Rounding out the top five movers, moving just one place either up or down is the rest of the fantasy league!

We have four players, Carlton The Doorman, Skid-Marc, Linda The Cookie Mom and Kathy The Church Forecloser that racked up a single digit for their Pocono score this week.  Of those four poorly performing players we have a tie for “The Crappiest Pick of The Week”!  This award will be shared between Kathy The Church Forecloser and Jerry The Buschwacker.  Both were rooting for Mr. Seven-Time, Jimmie Johnson, but were only able to add a microscopic 2 points to their totals this week.

Lastly, we have a new “Prince of The Poophouse” this week.  Ol Skid-Marc has evicted Jeremy The Coach from his very comfortable and very familiar digs in “The Outhouse”!  With just three races to go, the race is on for control of “The Outhouse”!

Next week NASCAR moves slides on up to the finger lakes region of upstate New York, to Watkins Glen International for some left and right turns.

As the haulers pull out of Pocono and head through some of the small hamlets heading back to I-95 and on to Charlotte, it is a long, long road back to the shops. Not far out of the the race track on their way back home is Nazareth, PA.  I just wonder if sometimes the hauler drivers might be humming along with Levon Helm the following lyrics:

“I pulled into Nazareth, was feeling ’bout half past dead
I just need some place where I can lay my head
Hey, mister, can you tell me, where a man might find a bed?
He just grinned and shook my hand, “No” was all he said.”