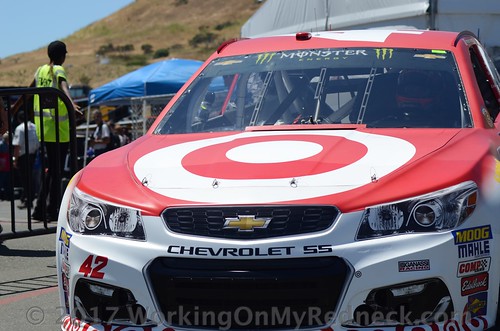 This week NASCAR makes its second and last visit in “The Last Colloseum”, Bristol Motor Speedway, for a Saturday night race.  As “the regular season” winds down, not only are there a few drivers dreaming about the playoffs, some of our players are knee deep in  a “river of dreams”!

As this segment comes to a close and the Bristol night race is eminent, “Young Money”, Kyle Larson, leads to way with four players in his hip pocket.  That quartet consists of Jim, aka Chiefy, Bobby Blue Crush, Jeremy The Coach, as well as Bernie The Bay Area Bandit all are hoping to end the second segment on a very high note and a great score from a Larson victory!

With nearly as many supporters this week, “Mr. Seven-Time”, Jimmie Johnson, has a trio of rooters that consists of Doug The Gandy Candy Man, Karen The highly Opinionated Southern Belle, as well as Leon Your Most Humble Sheriff.  It is safe to say that each of these players would love to end the segment with a big number!

Meanwhile, Cole The Redneck Understudy and Dan the Numbers Cruncher are putting all their marbles inside the marble sack of Kurt Busch this weekend.  Even though Kurt has been in a season long funk since winning the opening race, the Daytona 500, they are thinking that this will be the race that KyBu emerges from that summer long slump.

Lastly, Edie The Las Vegas Super Star and Lonna The Quilt Angel are backing “The Shrub”, Kyle Busch, at Bristol.

This week we have an usual event.  We have eleven (11) players who have banded  behind four drivers.  However, we have ten (10) players who are independent thinkers at Bristol.  That means that nearly one half of the fantasy league this week have individual selections and are in bidnez for themselves.