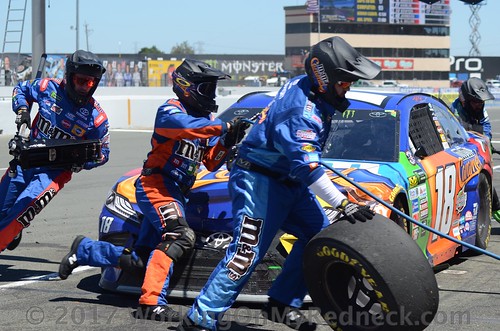 In a race fraught with tension, and with a pack of drivers with desperate agendas chasing him to the finish line, Kyle Busch held off Erik Jones to complete a sweep of all-three NASCAR touring series with Saturday night’s keystone victory in the Bass Pro Shops NRA Night Race at Bristol Motor Speedway.

Dicing through traffic on the final 79-lap green-flag run, Busch crossed the finish line 1.422 seconds ahead of Jones, a Sunoco Rookie of the Year contender, who will join the race winner as a teammate at Joe Gibbs racing next year.

This week the race winner produced the most points for our players.  Both Edie The Las Vegas Super Star and Lonna The Quilt Angel racked up a very cool 53 points with ol “Rowdy”, Kyle Busch, winning the race.  That 53 points scored by The Quilt Angel was enough to catapult her to the top of the leaderboard just in time to snatch the lead from Snoopy Dawn and win the second segment!

Jerry The Buschwacker finished off the segment with 49 points from Matt Kenseth’s 4th place finish, and that made him our second highest points grabber this week.

Ol Skid-Marc rebounded from his really average result last week to add 37 points to his tally as a results of Joey Logano’s 13th place finish.

Rounding out the list of top five scorers this week is another trio of players that includes Doug The Gandy Candy Man, Karen The Highly Opinionated Southern Belle and yours truly, Leon Your Most Humble Sheriff.  This group of players racked up 36 points from “Mr. Seven-Time”, Jimmmie Johnson’s 11th place finish.

As the segment comes to an end there was one last shake up!  When The checkered flag flew at Bristol 2/3 of the fantasy league changed places, which means the 7 players, Bobby Blue Crush, Jim, aka Chiefy, Doug The Ageless Sprint Car Driver, Dan The Numbers Cruncher, Skid-Marc, David The Mudslinging Throttle Jockey and A&M Aggies Sue remained status quo.

The biggest mover this week is Kathy The Church Forecloser who slithered down the totem pole five (5) spots to finish out this segment in 13th place.

Both Karen The Highly Opinionated Southern Belle and Bernie The Bay Area Bandit each stepped up three (3) spots to finish out in 14th and 15th, respectively.

The remaining seven players moved only one (1) spot which includes the second segment winner, Lonna The Quilt Angel, Snoopy Dawn, Leon Your Most Humble Sheriff, Cole The Redneck Understudy, Carole, aka Rudy, Carlton The Doorman and Jeremy The Coach.  The Quilt Angel, Your Most Humble Sheriff, and The Coach all moved up one position finishing out the segment in 1st, 6th and 17th place, respectively.  Conversely, The Redneck Understudy, Rudy and The Doorman slipped one place to finish out in 7th, 13th and 16th, respectively.

This week we only have one player who had the misfortunes to log a single digit for their weekly score, Kathy The Church Forecloser.  When you can only muster up 8 points for the race you will be the winner of “The Crappiest Pick of The Week” award.

As the segment progressed it became quite apparent to Your Most Humble Sheriff that “The Outhouse Award” would most definitely wind up at the house of Jeremy The Coach.  After all he was the initial member this segment and dwelled there the longest, about eight (8) of the twelve weeks.  But in true fashion The Coach pulled out a rabbit out of his coach’s hat and allowed A&M Aggie Sue to evict him from his familiar digs and claim the second segment “Outhouse Award”!

PS I would be remiss if I did’t let everybody know that our resident midget driver, David The Mudslinging Throttle Jockey, “Parked It” Saturday night at Kern County!!! You could say that our man showed them the fast way around that place and “let the big dawg eat”!  A big two thumbs up, Champ!!!

Next week is a bye week for the Cup drivers.  So we have an extra week to either relish in our successes, or wallow in our failures of the second segment. Just take refuge in that it “takes all kind of kinds”!