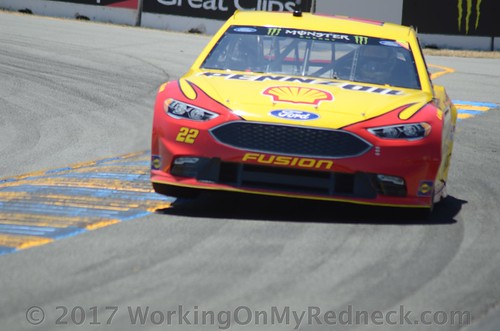 In case you haven’ noticed, we are in the middle of the dog days of summer, the days are hotter, the racing is racier, and the tempers are getting shorter! Having said all of that, we are starting our third and final segment, there are just two races left in the ‘regular season’, and it is time for a few drivers to “let the big dog eat”, if they are going to secure a place in the 2017 playoffs.

Nearly one quarter of our fantasy league, five players, have put their sights on Joey Logano.  Cole The Redneck Understudy, Jerry The Buschwacker, Skid-Marc, David The Mudslinging Throttle Jockey, as well as Jeremy The Coach are putting all their marbles in the marble bag of “Sliced Bread” this weekend.  Even though he has a victory earlier in the season, it was deemed an “encumbered” victory because of a post race penalty.

There are four drivers that have a rooting section of two players each.  Both the second segment winner, Lonna The Quilt Angel and Dan The Numbers Cruncher are supporting Kyle Busch for the Bojangles’ Southern 500.

Carole, aka, Rudy, and Bernie The Bay Area Bandit are banding together to offer their support for Jimmie Johnson.  Both are hoping that “Mr. Seven-Time” can prevail, win the race, and drive his hot rod into Victory Lane at Darlington.

JIm, aka Chiefy and Zee, aka Sissy will be tag-teaming and backing Matt Kenseth.  They are hoping that Kenseth can grab a victory and punch his ticket to the playoffs.

Rounding out the Darlington picks is an unlikely pair consisting of A&M Aggie Sue and Karen The Highly Opinionated Southern Belle who are backing the hottest driver in 2017, Martin Truex, Jr.

With all the wind, rain, flooding, loss of life and major devastation going on in SE Texas, my thoughts and prayers go out to all of those folks.  I can only hope that my relatives down there will persevere and come out stronger on the other side.