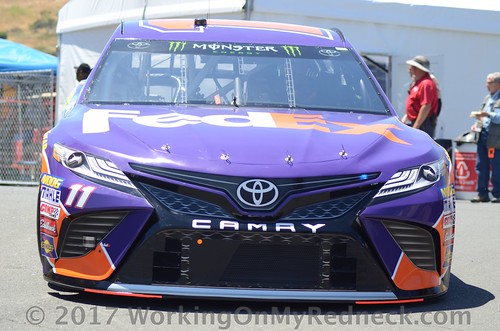 Denny Hamlin made a huge mistake on Sunday night!

Then the driver of the No. 11 Joe Gibbs Racing Toyota made an even bigger world class comeback to win one of NASCAR’s most prestigious races.

Running down race leader Martin Truex Jr. from 20 seconds back after missing the entrance to pit road on Lap 313 of 367, Hamlin won the Bojangles’ Southern 500 for the second time, finishing off a sweep of the throwback Monster Energy NASCAR Cup Series/NASCAR XFINITY Series weekend at Darlington Raceway.

On tires that were 10 laps fresher than Truex’s, Hamlin exited pit road in 14th-place on Lap 315 after missing the entrance the first time and methodically began to chop into Truex’s lead. With just over two laps left, Hamlin was closing fast, as Truex was fighting to maintain control of his car on worn-out rubber.

Truex grazed the wall on Lap 365, then cut a tire and bounced off the wall again as Hamlin rushed past. Two laps later Hamlin had his second victory of the season and the 31st of his career.

This week Leon Your Most Humble Sheriff was the only player with knowledge aforethought to select “The Delivernator”, Denny Hamlin. to win the race!  So The Part-Time Cardiologist, Strawberry Picker and Elephant Driver started out this segment with a very cool 57 points, which positioned him to the top of the totem pole starting this segment!

Five players racked up 43 points this week.  Edie The Las Vegas Super Star, Snoopy Dawn and Carlton The Doorman were “rolling the bones” for Kevin Harvick.  “Freaky Fast” Harvick’s 9th place finish paid off handsomely for this trio.  Also receiving 43 points at Darlington included Lonna The Quilt Angel and Dan The Numbers Cruncher, who were betting the farm on ol Kyle Busch this week.

Doug The Gandy Candy Man did well for himself, gathering up 33 points from “Blazingly Bad” Brad Keselowski’s 15th place finish.

Rounding out the top five scorers this week is Zee, aka Sissy and Jim, aka Chiefy.  Sissy and Chiefy were fully supporting Matt Kenseth’s effort to win the race and punch his ticket to the playoffs.

Since this is the first race of the segment there were no movers, only shakers!

The person who secured “The Crappiest Pick of The Week” award got a two-for-one!  You see since this is the first week of the new segment, the person who has the crappiest pick of the week would also be the one who wins “The Outhouse Award”, as well!  As they say to the victor go the spoils!  This week Kathy The Church Forecloser goes 2-for2!

Next week NASCAR is on to Richmond for the last race of “the regular season”.  It is the last time for many drivers to fulfill their 2017 “river of dreams”!

TIL NEXT TIME, PULL YOUR GLOVES UP, FLI YOUR VISOR DOWN, AND LET’S GO RACIN’!