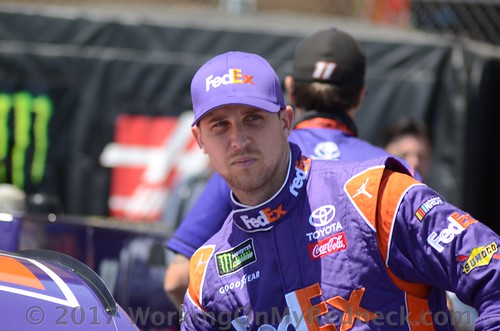 This week NASCAR rolls north un I-95 to the capital of the Confederacy, Richmond, VA for the last race of “the 2017 regular season”.  Being that this is the last chance for some drivers to stake their place in the playoffs, it would not be a stretch of the imagination to see some very aggressive driving Saturday night! Add to that fact that this is a short track where egos and feelings get bruised, where tempers are lost,  where sheet metal gets crumpled and where all crew members must check their weapons at the pit gate prior to entering the racing facilities, there will be some drivers and crew members leave the track with a chapped rectum!

Nearly one quarter, five players in all, are rolling with “The Delivernator”, Denny Hamlin, at Richmond.  Those five players this week includes Edie The Las Vegas Super Star, Lonna The Quilt Angel, Snoppy Dawn, Cole The Redneck Understudy, as well as A&M Aggie Sue.

Karen The Highly Opinionated Southern Belle, Carole, aka Rudy and Linda The Cookie Mom are banding together to back “Young Money”, Kyle Larson, in his attempt to add another victory, playoff points, and possible championship to his 2017 resume.

Additionally, Doug The Gandy Candy Man, Bobby Blue Crush and Leon Your Most Humble Sheriff are steadfastly backing “Sliced Bread”, Joey Logano and his last minute effort to make the playoffs this year.

Rooting for Ryan Blaney this week at Richmond is Carlton The Doorman and Kathy The Church Forecloser.

Meanwhile, Jerry The Buschwacker and David The Mudslinging Throttle Jockey are supporting “Freaky Fast” Kevin Harvick, and both are hoping that he can show the field the fast way around Richmond.

Lastly, Skid-Marc and Bernie The Bay Area Bandit are pooling all their resources in hopes of Brad Keselowski adding one more victory to his tally before “The Playoffs” begin next at Chicagoland.

Since Richmond is the last race before The Playoffs, for many of the teams to have a chance to get there, they will have to “set the world of fire” Saturday night!

Good luck to everyone.