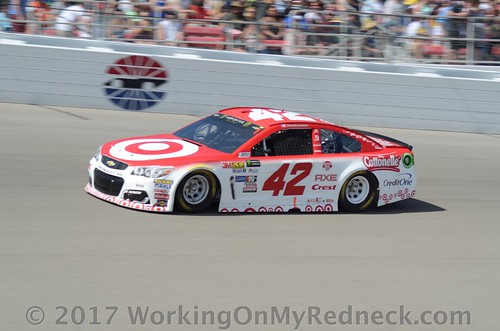 A caution on Lap 397 of a scheduled 400 in Saturday night’s Federated Auto Parts 400 turned what looked like a coronation for Martin Truex Jr. into an unexpected overtime victory for Kyle Larson, as the field of 16 drivers was set for the Monster Energy NASCAR Cup Series Playoffs.

Truex, the regular season winner, had a comfortable lead over Larson when Derrike Cope brushed the outside wall with three laps left in regulation. Larson won the race off pit road after the lead-lap cars pitted for tires, and the driver of the No. 42 Chip Ganassi Racing pulled away from a restart on Lap 403.

One lap later, contact between the Toyotas of Truex and Denny Hamlin sent Truex’s No. 78 Camry rocketing into the Turn 1 wall, and the race ended under caution with Larson in the lead and Joey Logano, who needed a win to qualify for the postseason, rolling home in second place after making the most of a restart from the ninth position.

There were three players who were riding shotgun with Joey Logano in his must win, do-or-die, situation at Richmond.  Although Logano didn’t win the race, he did, however, finish in 2nd place.  That second place finish gave Doug The Gandy Candy Man, Bobby Blue Crush and Leon Your Most Humble Sheriff 47 much needed points!

Meanwhile, Jeremy The Coach snookered everyone by selecting the young gun who will be replacing Matt Kenseth in the JGR No. 20 Toyota next year, Erik Jones.  Jones rallied for a 6th place finish which reflected in a 43 point day for The Coach.

Having another stellar race was Jim, aka Chiefy.  Ol Chiefy was onboard with “Busch The Younger”, aka Kyle Busch.  “The Shrub” brought his Toyota home in 9th place, giving Chiefy 39 points.

Rounding out the top five scorers this week is Zee, aka Sissy.  Sissy was hanging out all race with the dominate car, Martin Truex, Jr.  Unfortunately MTJ got caught up in a late race fluke!  That late race accident cost him the race and her a significant amount of points.  However, she did rack up 33 points!

Early in the segments there is, at times, wild gyrations and massive movement, this is one of those weeks!  The single biggest mover, Carlton The Doorman, tumbled ten (10) positions after Richmond!  Loosing those crucial ten places sent The Doorman plummeting down into 15th place.

Conversely, Carole, aka Rudy, rocketed up the leaderboard eight (8) spots to land in 7th place.

Similarly, Linda The Cookie Mom had a very positive result.  The Cookie Mom elevated herself seven (7) places on the totem pole to rest in 6th place.

Jeremy The Coach also had a very positive results after Richmond.  The Coach moved up six (6) spots to finish up in 14th position.

For the second consecutive week “The Crappiest Pick of The Week” goes to Kathy The Church Forecloser!  The Forecloser received 19 points, which for most weeks isn’t too bad of a score,  However, this week that score was enough for her to retain her position as ‘The Princess of The Poophouse”, aka winning “The Outhouse” award.again.

Now that Richmond is in the history books, and the drivers are set for the first three races of the playoffs, the pressure is on for these 16 drivers.  For the rest of the drivers that were oh so close to making the playoffs, I am sure that on the ride back to Charlotte they were replaying the the race and the the regular seasonin their minds thinking about all the  “what ifs”……..  I’m just saying.