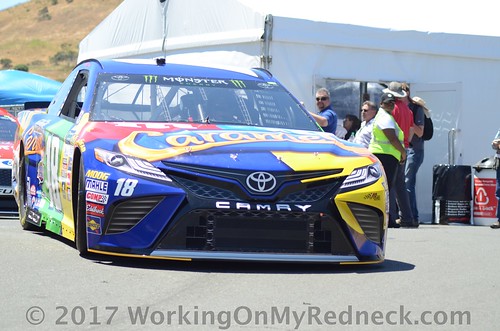 Ol Kyile Busch can breathe easily now after locking himself into the Round of 12 of the Monster Energy NASCAR Cup Series Playoffs with a dominating victory in Sunday’s ISM Connect 300 at New Hampshire Motor Speedway.

Starting from the pole, Busch collected a stage victory and led a race-high 187 laps en route to his third win of the 2017 season.

There was only one player who was riding shotgun with the race winner today.  David The Mudslinging Throttle Jockey was the sole player that had selected ol “Rowdy”, aka Kyle Busch.  So to say that The Mudslinging Throttle Jockey had a great Sunday would be somewhat of an understatement!  Ol Kylie produced 58 points for “The Mudder”!  I might add that those 58 points was more that enough to get him evicted from “The Outhouse” this week!

Well this mixed matched trio, Kathy The Church Forecloser, Jim, aka Chiefy, as well as Bernie The Bay Area Bandit came out smelling like a rose at Louden. All three of these players exhausted their “Young Money” pick early in this segment!  Fortunately for them picking Kyle Larson at New Hampshire was quite fortuitous!  All three of these players packed away a cool 50 points this week.

Next up is a gaggle of six players that were betting the farm on one of the drivers who, currently, does not have a job for 2018, Matt Kenseth.  These six players include Jeremy The Coach, Doug The Gandy Candy Man, ol Skid-Marc, Snoopy Dawn, Karen The Highly Opinionated Southern Belle, and Leon Your Most Humble Sheriff, and all are doing their version of the happy dance with 48 points added to their 3rd segment totals.

Rounding out the top five scorers this week is a trio consisting of Bobby Blue Crush, Carole, aka Rudy and Cole The Redneck Understudy.  All three of these players were riding shotgun with “Blazingly Bad” Brad Keselowski.  “Bad Brad” delivered to this trio 45 points for the afternoon!

This is another week where there was widespread movement throughout the leaderboard.  In fact, only three players remained in their previous spots, the leader and Your Most Humble Sheriff, second place player Bobby Blue Crush, fifth place player, Doug The Gandy Candy Man, as well as Kathy The Church Forecloser.

The biggest movers of the week is our resident accountant, Dan The Numbers Cruncher and Linda The Cookie Mom!  For his microscopic 2 point Sunday The Numbers Dude dropped like a hot potato falling eight (8) spots from mid pack on the totem pole to landing on the front porch, 20th place, and nearly taking control of “The Outhouse”! The Cookie Mom grabbed 24 points Sunday, however, with the numbers that many of the other players slapped up on the board, she plummeted eight (8) spots to rest now in 13th place.

Next up are five players, Carlton The Doorman, Bernie The Bay Area Bandit, A&M Aggie Sue, Cole The Redneck Understudy, as well as Lonna The Quilt Angel, all moved four (4) places this week.  The Doorman, The Bay Area Bandit, The Redneck Understudy and The Quilt Angel all stepped up four spots to sit in 9th, 10th, 12th and 13th, respectively.  Aggie  Sue, however, slid down to sit in 11th place.

Both Skid-Marc and David The Mudslinging Throttle Jockey moved up three (3) place to reside in 15th and 18, respectively.

Rounding out the top five movers is a quartet of players that includes Jim, aka Chiefy, Jeremy The Coach, Snoopy Dawn, as well as Zee, aka Sissy. Chiefy, The Coach and Snoopy all climbed up two (2) places to land in 6th, 7th and 8th, respectively.  Sissy, on the other hand, fell two spots and now sits in 17th place.

Dan The Numbers Dude takes home “The Crappiest Pick of The Week” award.  The Numbers Dude could only muster up a minuscule 2 points this week. Nevertheless, The Numbers Cruncher did not fall all the way to the bottom this week.  That dubious honor falls on the shoulders of Jerry The Buschwacker, who is our new Prince of The Poophouse!

Next week NASCAR travels northeast from Charlotte to Dover, DE.  Dover is the elimination race for this round and for the bottom four drivers in points it will be “the last dance”!