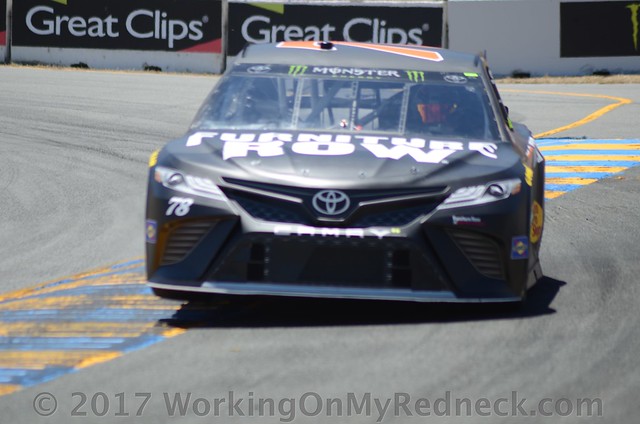 With the race at Charlotte this weekend we are coming up to the halfway point of the third segment.  Where did this season go, my firends?  Here we are already in the first week of October and well into the 2017 playoffs.  It will not be too long before thsi season comes to a conclusion and a champions crowned at Homestead.

It should be no surprise that one of the most dominate drivers for this season, Martin Truex, Jr., is the choice of one fifth of the fantasy leage this week.  Among his supporters this week are Kathy The Church Forecloser, Snoopy Dawn, Cole The Redneck Understudy, Doug The Gandy Candy Man, as well as Leon Your Most Humble Sheriff who are betting that Truex can parlay another victory and punch his ticket to the round of 8.

Likewise, Bobby Blue Crush,  Carlton The Doorman, as welll as Karen The Highly Opinionated Southen Belle are hanging with Mr. Seven-Time, Jimmie Johnson this weekend.These three players must think that since the playoffs are heating up, they are betting that Johnson is doing the same.

We also have three drivers that have a support group of two players each  on their sides at Charlotte.

Even though Kurt Busch has cooled of very significantly since his victory in the Daytona 500, Edie The Las Vegas Super Star and David The Mudslinging Throttle Jockey are fully supporting him this weekend.

Similarly, Lonna The Quilt Angel and Carole, aka Rudy and are really hoping that Chase Elliott can finally brak through and secure a victory for the HMS No. 24 team at Charlotte Sunday evening.

With the passing of rock icon, Tom Petty this week, as well as the playoffs starting the Round of 12 at Charlotte, there are 12 driver that are “running down a dream”!