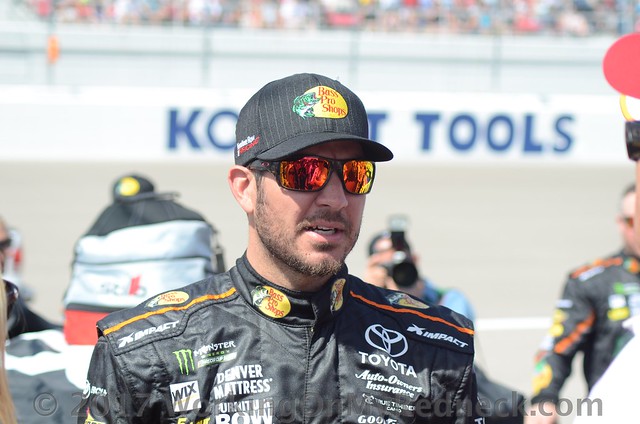 Martin Truex Jr. kicked off the Monster Energy NASCAR Cup Series Round of 12 with a flourish, notching his second win of the postseason Sunday at Charlotte Motor Speedway.

Truex’s Furniture Row Racing No. 78 Toyota led 91 of 337 laps to win the Bank of America 500, the fourth of 10 playoff races for the series. Truex survived a pair of late-race restarts and an overtime finish to secure his sixth victory of the season, his second at the 1.5-mile track and the 13th of his Monster Energy Series career.

The triumph gave Truex automatic advancement into the next three-race elimination series, the Round of 8. He leads the postseason standings by a sizable margin thanks to his proficiency in collecting playoff points through stage wins, race victories and his regular-season championship.

This week we have four players who share this weekly award.  Doug The Gandy Candy Man, Cole The Redneck Understudy, Snoopy Dawn, as well as Leon Your Most Humble Sheriff were all hanging tight with the hottest NASCAR driver of 2017, Marin Truex, Jr.  The quartet all racked up a timely 47 points this week!

Even though there was a quartet of players who selected Martin Truex, Jr. to win the race, they were not the highest scorers of the week.  No, as hapens from time to time, the winner of the race was not be the highest scoring driver of the race.  This week Carole, aka Rudy, was betting the farm on Chase Elliott, and she was rewarded very nicely. Ol Chase had a couple of good stage results to go with his 2nd place race finish, and that yielded Rudy 53 points!

As was mentioned above, the four drivers that were riding on the Truex Train at Charlotte, The Candy Man, The Redneck Understudy, Snoopy and The Old Sheriif were the second highest scorers of the week with 47 points.

Rounding out the top five scorers this week is the duo of Carlton The Doorman and Bobby Blue Crush.  Both players racked up a nice score of 34 points from Jimmie Johnson’s 7th place finish.

Once again there was quite a bit of movement from within the leaderboard, fifteen players slid around in the standings.  Although there wa no change in the first three positions, Leon Your Most Humble Sheriff, Carole, aka Rudy, and Doug The Gandy Candy Man remained in their pervious spots.  Likewise the same could be said for Jim, aka Chiefy, Zee, aka Sissy and David The Mudslinging Throttle Jockey.  After basic math one could deduct that there were fifteen (15) players who either moved up or down this week!

This week the highest movers happens to be a mismatched trio that moved five (5) positions.  Both Jerry The Buschwacker and Kathy The Church Forecloser rose to the ocassion and climbed up the totem pole five spots to sit in in 15th and 16, respectively.  However, Dan The Numbers Cruncher wasn’t so frotunate this week.  No, in fact The Numbers Dude slithered down the totem pole all the way to the very base of it, to 21st place, and forcefully evicted The Church Forecloser out of her warm fuzzy place in “The Outhouse”!

There is a trio who moved four (4) spots after the checkered flag flew at Charlotte.  This trio includes Lonna The Quilt Angel, A&M Aggie Sue and Bernie The Bay Area Bandit.  The Quilt Angel stepped up to sit 6th on the leaderboard this week, while Aggie Sue and The Bay Area Bandit plummeted four spots down the scoring pylon to rest now in 13th and 19th, respectively.

Both Kilimanjaro Bobby and Edie The Las Vegas Super Star dropped down two (2) places to hang out in 9th and 10 respectively.

Six players, Snoopy Dawn, Karen The Highly Opinionated Southen Belle, Jeremy The Coach, Carlton The Doorman, ol Skid-Marc and Linda The Cookie Mom all moved just one position this week.  Snoopy, The Doorman, and Skid-Marc moved up one place to sit now in 4th, 11th and 12th.  But The Highly Opinionated One, The Coach and The Cookie Mom all fell one spot this week resting in 5th, 7th and 20th, respectively.

This week we have one player who takes both of the awards that are given out in this section of the post!  It is not that often that it comes out that way, however it surely did this week.  Dan The Numbers Cruncher barely eeked out “The Crappiest Pick of The Week” award!  The Numbers Dude could only muster a score of 10 points from Clint Bower this week.  But nonetheless, he racked up the smallest amount of points this week, just barely beating out Bernie The Bay Area Bandit who could only add 11 points to her totals this week!

Those microscopic 10 points scored by The Numbers Dude was enough to plummet him right into “The Outhouse”, and serve an eviction notice to Kathy The Church Forecloser!

Next week NASCAR makes a return to the deep south, to “Sweet Home Alabama”, specifically to Talladega, where the playing field is level and anyone can win that race!