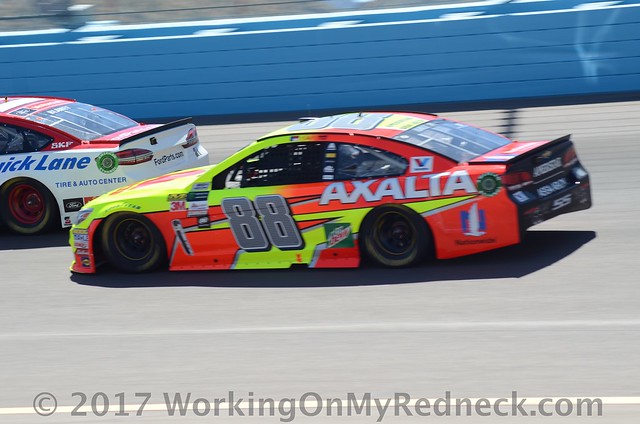 This  week the NASCAR circus heads south from Charlotte to The Deep South.  More specifically the haulers are heading down to the Talladega Superspeedway!

We have a three way tie for the most support for this race with two Juniors, Dale Earnhardt, Jr. and William Clyde Elliott, Jr. (better known as Chase) and Kyle Busch at the top of the list.  Since this is the last resrtictor plate race of the 2017 season, and it is also Dale Earnhardt Jr’s last race at Talladega, additionally I do run this fantasy league, therefore, it is this Redneck’s perrogative to put the picture of my favorite driver, The Pied Piper of Restrictor Plate Racing, up as the photo leading into this article!  LOL!!

We have three drivers who have a cheering section of four players each for Talladega.

This week Jim, aka Chiefy, Cole The Redneck Understudy, Linda The Cookie Mom, as well as Leon Your Most Humble Sheriff are backing Dale Earnhardt, Jr., for the last time, at a track where he has ten career victories.  Could this be Junior’s last hurrah and his last great chance to grab a victory in his last race at, what arguably could be “The Earnhardt House”?  If that were to happen JUNIOR NATION woudl bring the house down, for sure!

Karen The Highly Opinionated Southern Belle, Kathy The Church Forecloser, ol Skid-Marc, as well as Dan The Numbers Dude are steadfastly banking that Chase Elliott will notch his first MENCS victory at Talladega.  It has been widely noted that Elliott would love to be the second NASCAR driver to win a race in the No.24, Jeff Gordon being the only driver to win in the No.24 in NASCAR history!

The last driver to have a rooting section of four players is Kyle Busch.  His four supporters include Carole, aka Rudy, Snoopy Dawn, Jerry The Buschwacker, as well as Bernie The Bay Area Bandit,

There are two drivers who have a pair of rooters in their corner.  Lonna The Quilt Angel and Doug The Gandy Candy Man are banking that the driver formally known as “The Outlaw”, now known by his given name, Kurt Busch, can put an exclamation point on his 2017 season and hoist the hardware Sunday.

Relying on my basic math skills would indicate that we have five players who are going it alone, and we all know what that means.  What it really means is that those independent players are really in bidnez for themselves!

On a personal note, a few years ago me and ol Chiefy were fortunate enough to make this October Talladega race three years in a row.  I can stillremember the first time that I parked the car and gazed over at the race track!

I thought to myself:

When the winds go cold and it blows October,
I think about us shoulder to shoulder,
Like those cars my thoughts roll over and over and over,
In my mind

TIL NEXT TIME, PULL YOUR GLOVES UP, FLIP YOR VISOR DOWN, AND LET’ GO RACIN”!