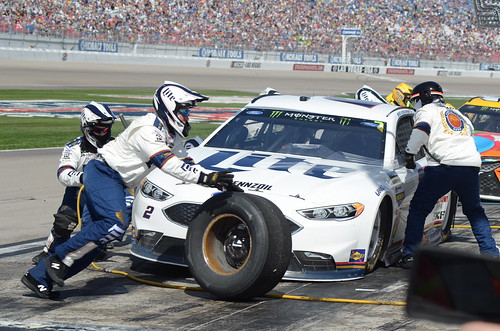 On the Longest Day at Talladega—in a war of attrition that required three red flags and left 14 cars running at the finish—Brad Keselowski powered his No. 2 Team Penske Ford past the No. 31 Chevrolet of Ryan Newman on the final lap to win Sunday’s Alabama 500 at Talladega Superspeedway.

Two laps after the final restart on Lap 186 of 188, Keselowski and teammate Joey Logano ganged up on Newman, who held the runner-up position after Keselowski shot past him. Trevor Bayne ran third in a damaged No. 6 Ford, with Logano and Aric Almirola finishing fourth and fifth, respectively.

This week both Carlton The Doorman and A&M Aggie Sue were riding shotgun with “Blazingly Bad” Brad Keselowski.  “Bad Brad” was able to snatch the victory away from Ryan Newman, and thus reward these two players with 59 points each!

Following The Doorman and Aggie Sue on the scoring pylon is Zee, aka Sissy, gathering up 42 points from Joey Logano’s 4th place finish.

Lining up in third place on the weekly scoring chart is David The Mudslinging Throttle Jockey adding 35 points to his totals this week from Ryan Newman’s 2nd place finish.

Meanwhile, Linda The Cookie Mom, Cole The Redneck Understudy, Jim, aka Chiefy, as well as Your Most Humble Sheriiff, were all hoping that Dale Earnhardt, Jr. would make his last appearance at Talladega as a full time Cup driver count and add to his legacy at facility.  But it was not to be Sunday.  Nevertheless, Dale Jr. did grab an 8th place finish and reward these four with 30 points.

Rounding out the to five this week is Karen The Highly Opinionated Southern Belle, Kathy The Church Forecloser, ol Skid-Marc, as well as Dan The Numbers Cruncher.  All of these players were riding with Chase Elliott at Talladega and were rewarded with 28 points.

Only four players remained in their previous weeks positions, the top three, Leon Your Most Humble Sheriff, Carol, aka Rudy, Doug The Gandy Candy Dude, as welll as ol Skid-Marc.

The single biggest mover in week seven is Carlton The Doorman, rocketing up the scoring pylon six (6) places to land in 5th place.

Following closely behind is A&M Aggie Sue, who climbed up the totem pole five (5) spots to sit in 8th place after the checkered flag flew at Talladega.

Jerry The Buschwacker, however, did not fare so well dropping four (4) places to rest in 19th place, only 13 points from “The Outhouse”!  It would appear that he is getting all his ducks in a row and making a late segment run for “The Outhouse”!

Rounding out the top five movers of the week is a group of five players that includes Snoopy Dawn, Bobby Blue Crush, David The Mudslinging Throttle Jockey, Linda The Cookie Mom and Bernie The Bay Area Bandit.  Both The Throttle Jockey and The Cookie Mom stepped up their game and climbed up two (2) places to sit in 16th and 18th, respectively.  But Snoopy, Blue Crush and The Bay Area Bandit all lost the draft and slid down two spots to reside in 6th, 11th and 21st, respectively.

We have a four player tie this week for “The Crappiest Pick of The Week”!  This gaggle of players includes Carole, aka Rudy, Snoopy Dawn, Jerry The Buschwacker and Bernie The Bay Area Bandit.  All four players logged a mere 12 points this week!  We salute this fine group!

We have a “Princess of The Poophouse” this week!  This is a real gasser, not only did The Bay Area Bandit share in “The Crappiest Pick of The Week” award, but she did so poorly that her performance landed her securely into “The Outhouse” this week, evicting Dan The Numbers Dude!

Next week NASCAR rolls into the heartland of America and the Kansas Speedway, for yet another race at a mile and a half race track.  Kansas is the elimination race for the Round of 12, and for those four drivers that are facing elimination it really “cuts like a knife”!