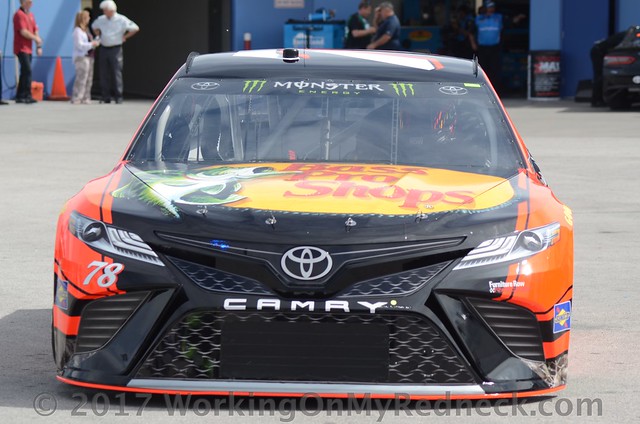 Martin Truex Jr. survived a restart penalty and an unscheduled pit stop to return to what has become a thoroughly familiar locale—Victory Lane—in Sunday’s Hollywood Casino 400 at Kansas Speedway.

In a dramatic race that brought Truex his seventh Monster Energy NASCAR Cup Series win of the season, calamity eliminated four drivers from the series Playoff. Jamie McMurray, Ricky Stenhouse Jr., Matt Kenseth and Kyle Larson all saw their postseason hopes end with the final event in the Round of 12.

The shocker was Larson, who fell out of the race on Lap 77 when his engine exploded on the frontstretch after dropping a cylinder a few laps earlier. The driver of the No. 42 Chip Ganassi Racing Chevrolet finished 39th in a 40-car field and dropped to ninth in the standings, nine points behind Jimmie Johnson.

The seven-time champion moved into the Round of 8 despite spinning twice in the space of five laps late in the race. But Johnson was the prime beneficiary when NASCAR parked Kenseth, after a massive wreck on Lap 198, for a violation of the damaged vehicle policy, specifically having too many crewmen over the wall to work on the car on pit road.

Nobody was riding shotgun this week with the hottest driver in Cup, Martin Truex, Jr., so this award goes back into the vault this week!

The highest scorers this week comes from the duo of David The Mudslinging Throttle Jockey and Jeremy The Coach.  Both of these players put all their marbles into the marble sack of Denny Hamlin at Kansas.  Fortunately for these two, “The Delivernator” ended his day in 5th place a rewarded them with 50 points.

Following that motley duo on the scoreboard was Zee, aka Sissy, who racked up a nifty 47 points.  Sissy was the only player to ride along with “Freaky Fast” Kevin Harvick at Kansas.

But neither Snoopy Dawn nor Doug The Gandy Candy Man was on “the down low” this week.  Both players were quite fortuitous in their choice at Kansas, Ryan Blaney.  Blaney ran with the big dogs all afternoon and rallied to a 3rd place finish that gave The Candy Man and Snoopy 44 points.

Meanwhile the trio of A&M Aggie Sue, Cole The Redneck Understudy, as well as Leon Your Most Humble Sheriff were rallying behind “ol Rowdy”, aka Kyle Busch this week.  Ol Rowdy ran in the top ten most all of the race and, in fact, finished in 10th as the checkered flag flew, which gave this trio 43 points each.

Rounding out the top five scorers this week is Bobby Blue Crush and Carole, aka Rudy.  Both Blue Crush and Rudy were rooting on the driver formally known as “The Outlaw”, now know by his given name, Kurt Busch.  KuBu was sinffing the tail pipes of the race leader, Martin Truex, Jr. added a second place finish to his season finishes, and 35 points to the totals of this duo.

It is highly unusual that this late into the segment that there is so much movement.  But on closer examination of the scores, there is a larger group of players that have similar totals for the segment!  This week nineteen of the twenty one players swapped places!

Leading the way for the “movers” this week is Carlton The Doorman!  The Doorman had a disappointing afternnon at Kansas only logging 10 points.  Those 10 points scored plummeted him five (5) spots to land in 10th place.

Next on the “moving list” is a the duo of Lonna The Quilt Angel and Edie The Las Vegas Super Star.   Both of these ladies tumbled four (4) places and settled in to 11th and 17th, respectively.

The next group of movers is a whole gaggle, 8 players in total.  This group of players includes Snoopy Dawn, A&M Aggie Sue, Cole The Redneck Understudy, Kilimanjaro Bobby, Zee, aka Sissy, David The Mudslinging Throttle Jockey, Kathy The Church Forecloser, as well as Linda The Cookie Mom.  As you can see this group is almost is half of the fantasy league!  Snoopy, Aggie Sue, The Redneck Understudy, Bobby Blue Crush, Sissy, The Mudslinger and The Church Forecloser all tippy toed up two (2) spots to rest in 4th, 6th, 7th, 9th, 12th, 14th and 15th, respectively.  Unfortunately, Linda The Cookie Mom fell two places to rest just outside of “The Outhouse”, in 20th place.

There is another group that numbers six players, Doug The Gandy Candy Man, Carole, aka Rudy, ol Skid-Marc, Jim, aka Chiefy, Jerry The Buschwacker, as well as Dan The Numbers Cruncher, who all moved just one spot as the Victory Lane celebration was occuring.  The Gandy Candy Dude, The Buschwacker and The Numbers Dude all stepped up one place to end the day in 2nd, 18, and 19th, respectively.

Both the leader on the soring pylon, Leon Your Most Humble Sheriff and “The Princess of The Poophouse”, Bernie The Bay Area Bandit. are the only players who remained in their previous places!

This week “The Crappiest PIck of The Week” is awarded to Edie The Las Vegas Super Star for her myopic 1 point she received from Daniel Suarez’ 36th place finish.

Once again The Bay Area Bandit remains firmly entrenched in “The Outhouse“!  She has a very comfortable 26 point cushion over her closest rival, Linda The Cookie Mom.

As the sunset in the heartland of America there were four drivers who will not be moving on to the Round of Eight.  Their dreams of being the 2017 MENCS champion has been dashed and their hearts are broken.  They may all resemble “The Tin Man” as they follow “The Yellow Brick Road” and leave Kansas!

Next week NASCAR heads up to Virgina for some short track beating and banging at Martinsville.